10 Things that we can learn from Dragonball Z

Gaurav Gandhi November 11, 2015 Deep Trip Series, Listicles: A Tribute to the Weird and Awesome World around us Leave a comment 4,306 Views

There are only a few mediums of art which capture the randomness around us more vividly than visual media like movies and cartoons. These form an integral part of our lives owing to the fact that they shape the way we essentially view the world. The immense effect that cartoons and movies have on our perception of the world around us has to be acknowledged if we are to learn something from them and view the world from a positive perspective. Well, there are essentially more things to be learnt from a season of Dragonball Z than a course in Calculus, strictly talking from a way-of-living point of view.

How many times have you tried the Kamehameha wave but failed? How much did you rejoice when Akira said there was going to be a Dragonball Super? How happy did you feel that a piece of your childhood was to be gifted to you by these characters of yore? Haven’t we all raised our hands to lend out “Ki” to Goku for the spirit bomb? The fight for the 9:30pm show at Cartoon Network, almost every home had it. Let’s take a walk through the lanes of our childhood and see how Goku and gang made us better people.

Remember when Goku gave up in his fight with….. Oh, of course you don’t. That is because he never did. Goku showed us how only the sheer will to never give up can make you win any fight. For those who remember the epic battle with Kid Buu, you would also remember the life lesson that the battle taught all of us 10-15-year-olds. Had Goku ever thought to himself, “Nah, this battle is getting too tough, I might as well just give up and let the producers come up with an alternate story”, we would have never seen him save the universe again and again. No matter how hard and gruelling it gets, it is important that we fight to the very end.

Pride and Vegeta are synonymous with each other. Vegeta may actually mean “pride” in Saiyan language or something. Out of all the dialogues in the series, one of the most intense dialogues which reflects this is, “You can take away a Saiyan’s mind and body. But what you can’t ever take away, is a Saiyan’s pride”. We all remember when Vegeta said this and how he went on to beat the hell out of Goku and break Babbidi’s control over him. Pride has always pushed him to train harder and strive to squeeze out every bit of potential that you have within you. So yes, pride isn’t bad until you prove to be worth it.

3. No matter how strong you are, you’ll always need people to survive

It hasn’t been said often but quite a lot of times, people tend to forget that they are not the only ones who reside in this world. The people around you and their perceptions toward you make you who you are. You’ll always need people on whom you can put your weight on. Remember the countless times when the Saiyans had to put their energies into Goku so that he could get up and complete a  battle? Or how many times the earthlings had to contribute to the spirit bomb? Well, Goku is the strongest person in the Universe and he still needs people to help. Who are you after all?

4. Hang around people who make you feel and do better

Right from the start, the reason why Goku has become better is because of his rivalries and his friends. Be it with Piccolo or Krillin, be it with Vegeta, or be it Uub and Gohan. Learning from people around you is the name of the game and it is the only way you can keep developing your potential. On a day to day basis, we need to look to others for inspiration and motivation; only then can we move on to understanding the immense potential we have within us. Leaving all prejudices and judgements aside, one can learn from everyone, irrespective of age or expertise. That is the prime essence of growing up, isn’t it?

5. Always protect the people you love,they are all you have.

Everyone who was/is a Dragonball-head remembers that scene from the Frieza saga where he kills Krillin causing Goku to go mad with rage. Goku goes so mad that he actually turns blonde. Well, not exactly blonde but turns into a Super Saiyan. He then promises to not let Krillin’s sacrifice go in vain and goes on the save the day as usual. The simple fact is, the people around us are all we have. Without the people we love, our existence is useless. Protect them. Love them. Keep them close. There’s no better reason to fight than to fight for the ones who you hold dear.

6. Understand you have limits, know that you can push them!

In order to realize your inner strength, you have to know your own limits. Only when you know your limits can you proceed to push beyond them and obliterate them completely. Goku knew he couldn’t defeat Cell, owing to which he asks Gohan to fight the battle. After all, Goku being a Super Saiyan and all, knew his boundaries and limitations. This is what enabled him to grow stronger and better over the next few (numerous) seasons. Where do you see yourself in the next few seasons of your life? After all, limits are where you set them to be.

7. Too much pure heartedness is not a good thing.

Time and again the pure hearted Saiyans get fooled because of their clear conscience. This is where guys like Piccolo and Vegeta come in handy. It is important to be logical and thick-skinned a large amount of times in life. Moreover, know your wits and use them whenever possible in order to make sure that you don’t get tricked by every other wannabe hustler on the street. Take a stand and be strong enough to support your decision, howsoever logical or illogical it might be.

8. It doesn’t matter how many times you fail, keep trying.

This old adage of “try and try till you succeed” has been quite misunderstood and labelled as “old-school”. But when you are taught the same lesson by a couple of spiky-haired individuals flying around the sky and hitting each other with pulsating balls of energy, the lesson doesn’t seem so uninteresting after all. While the world makes fun Krillin for dying all the time, they never realise that he is the who tries his best to help the people around him. Just because he tries, everyone in the Dragonball Z universe respects him. So never turn away from an opportunity for the fear of failure. Meet it head and even if you fail to make the most of it, you will be satisfied with the fact that you tried. Trust me, the dissatisfaction due to failure is quite subtle as compared to the dissatisfaction due to not having grabbed an opportunity

9. Not everything can be explained in terms of logic and science.

If you try to explain Dragonball Z to a bunch of scientists in terms of logic and evidence, they are probably going to advise you to take a drug test. On the other hand, what they fail to realize is that there are some things that cannot be explained in realms of logic and science, like the things people do for/in love, and of course things like human flight, telekinesis and so on. This can almost be compared to a mother lifting a car in order to save her baby. Simple fact is that there are things around us that are not explainable by scientific means and measures. Dragonball Z taught us to believe in a world full of infinite possibilities. That’s more than what my science teacher taught me during school. 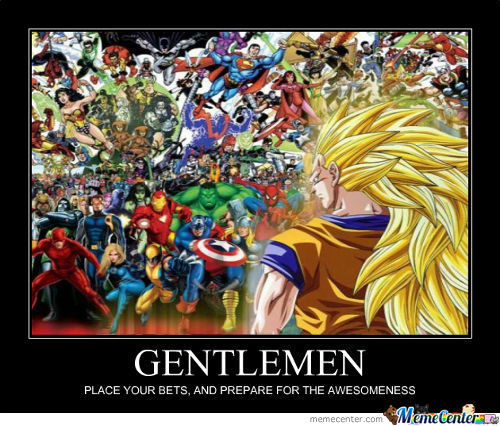 You should’ve seen this coming. This is undebatable. We all know even Yamcha would make Superman soil his pants. We can’t let the likes of Goku or Vegeta fight him. But then again, Goku did beat him, which essentially makes him stronger than Superman. Let the epic battle between the Dragonball-heads and DC fans begin!

P.S. Please people, this is not for those who try to and put in the principles of Physics in a fight between Goku and Superman. According to science, they cannot even exist. Now, what’s the fun in that?