Syria’s history informs us that it was one of the first places on earth where agriculture and cattle breeding appeared, a new stage in the life of the nomads. And it also is one of the places on earth where the essence of humanity has ceased to exist. Of course everybody knows there’s something going on in Syria but does anybody actually know what that something is? We’ve heard rumours, assumptions and hypothetical statements, but what the heck is actually going on?

To know the answers, we need to look at some things which a majority of us may not know.

15 teenagers under the influence of protests that took place at Tunisia and Egypt spray painted the revolutionary slogan which threw Syria into turmoil, “The people want the fall of the regime,” on a wall. They also set fire to a new police kiosk the same day in another act of lashing out. They were ultimately arrested, put behind bars and tortured. Within two weeks of the arrest, the protests began and people became uncontrollable. The ‘day of rage’ spread like fire into other cities. These protests were peaceful in nature in the beginning, consisting mostly of chanting about deserving greater freedom, until 18th March 2011, when the government responded furiously and open fired at the protestors. The following was also a dark one, as shooting at the victims’ funeral created unrest in other parts of the country that still hasn’t settled down. 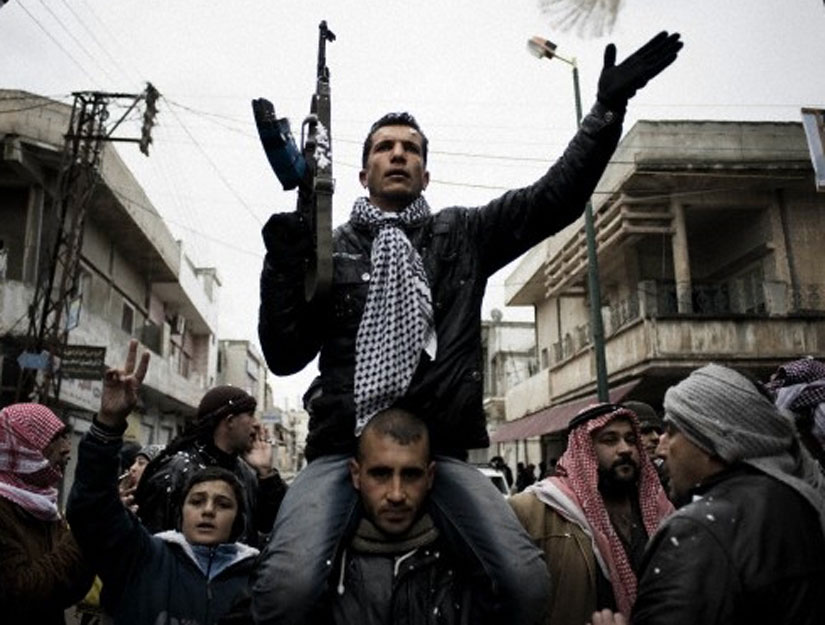 Due to the uncompromising nature of the government, people demanded that the President Basher Al-Assad resign. As the protests became violent, he promised to make changes in the way the country was running but protestors didn’t believe him. What followed was doomsday for the protesters, concluding in the massacre of 3500 people, in which 250 deaths were that of children as young as 2 years old and boys as young as 11 years old being raped.

This gave birth to as many as 1,000 groups opposing the government of Syria, since the conflict began. With an estimated 100,000 fighters to it’s name, amidst the clamour emerged the Free Syrian Army. The Syrian opposition, the United States, Canada, the European Union, and the majority of the Arab League insisted the resignation of Al-Assad from the presidency, while a fair amount of Syrian citizens and Russia supported him. This led to the now-famous civil war, but now it was not only a war amongst those who favour and do not favour Al-Assad, it was something much more devious.

In June 2013, a Northern General for the Free Syrian Army spoke out on Al Jazeera Qatar and stated that if international forces did not send weapons, the rebels attempting to overthrow Syrian president Bashar al-Assad would lose their war within a month.

The U.S, the Saudis, Jordan, Qatar, Turkey and Israel began providing weapons, training and money to the so-called rebel groups like the Free Syrian Army (Swann). In 2013, CNN reported that the weapons were “funded and organised by the CIA.” However, things began to fall apart when less than one year after the U.S. supplied Syrian “freedom fighters” with weapons, those weapons ended up in the hands of ISIS fighters.

The militant group ISIS was formed as a small insurgent group in Iraq in 2006. In 2009, ISIS shifted its focus from Iraq, where it was largely unsuccessful, and focused on the civil war in Syria. ISIS fighters came from the group that John McCain, a politician, insisted would help the U.S. overthrow Assad, namely the Free Syrian Army. Benjamin Swann, an American journalist, explained that the army was not only sending the Islamic State weapons, it was also sending them fighters. 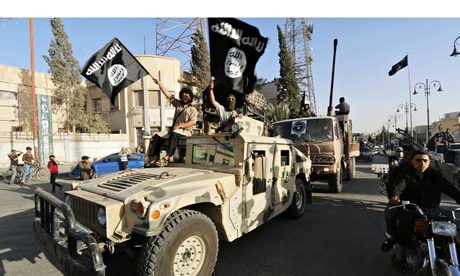 It wasn’t until June 2014 that ISIS went from nothing to “heavily armed and trained by U.S. and Coalition Special Forces “ “One of the most important facts that mainstream media ignores time and time again is that ISIS was able to grow so fast, because of all the U.S. military equipment they were able to seize – equipment that our military left in Iraq,” said Benjamin Swann. “Truckloads of Humvees, tanks and weaponry that instead of taking or destroying, the U.S. government simply decided to leave behind. However, even when the U.S. government became aware that ISIS fighters were capturing U.S. equipment, it did nothing.”

McAdams pointed out that ISIS makes $2 million a day off of selling oil, and the United States’ response, of “undercutting the competition” by blowing up oil fields makes no sense. Why was the US not placing sanctions on the banks or the oil companies that are involved?

Why is the U.S. sending $500 million to the Free Syrian Army to fight ISIS when the FSA is one of the biggest suppliers of fighters and weapons to ISIS? and Why are we sending new and more powerful weapons to the FSA like anti-aircraft missiles – weapons that we know will be in the hands of ISIS? The mainstream media will say that ISIS is the “creation of American inaction,” the reality is that they are the “product of direct action.”

There’s an astonishing similarity between what happened in Iraq and Libya. The same things that are being said about Al-Assad were said about Saddam Hussein and Gadhafi, and we all know what followed it. As Tulsi Gabbard, a U.S. congresswoman, has said, “If that happens here in Syria as US leaders are advocating for, we’ll end up with a situation far worse than we are seeing today, we’ll end up in a situation with far greater human suffering, with far greater persecutions of religious minorities, and our enemy will be far stronger, they will take over the entire country of Syria, they’ll have greater weapons and capabilities, and present a greater threat not only to the region but to the world.” 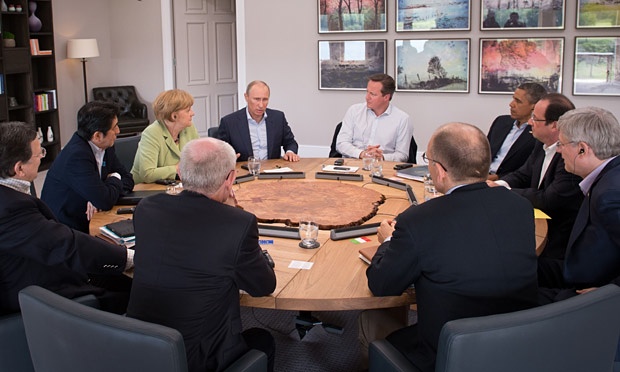 So what’s the current situation? U.S. Alliance is flying out terrorists in order to protect them from the Russians. As the Russians had bombarded positions of the al-Qaeda Front and is pointing out to fight against all terrorists in Syria. This was proven true by the Washington Post: A source from the military told the newspaper that the task of the special units was to support the US-fighters where it makes sense, and to leave those “initiatives that do not work “.

It doesn’t matter who has won or who will because what has been left behind is,

Before I say how important the refugees are let’s understand that the refugee crisis is different from the migrant crisis. As migrants choose to leave their country in search of better options while refugees don’t have a choice. “Refugees are people fleeing from conflict and persecution.” 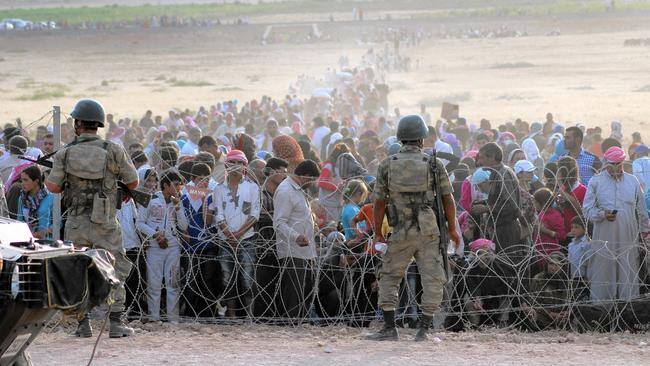 In 1951, The Refugee Commission assigned certain rights to the refugees, which the entire world has agreed to for 65 years but suddenly now has become inefficient in following the law.

When the refugees are in a country then the government has a legal set of responsibilities towards them. The inhumane attitude of not only Europe but other parts of the world has led to the smuggling of boats and deaths.

“Thousands of refugees are risking the lives of their children on unsafe smuggling boats primarily because they have no other choice.”

Estimated, half of these refugees are from Syria. From time to time, it has been proven that regional crisis does have a global impact. It might seem like it’s not our problem but we all are humans and we are responsible for each other.

We love to point fingers but based on my research everybody is at fault. Al-Assad is at fault for being a democratic leader but not practicing democracy and not tackling the situation of protestors wisely. The oh-so-concerned countries for making the civil war such a fuss, the media for portraying biased news, and us. Yes, all of us for being so blissfully unaware and selfishly living our lives. You might say what can we do? I counter question, what is it that we cannot? Raise our voices and compel the government all over the world to help the refugees, rebuild Syria.

“Call for mankind to unite against oppressors, that’s practically achievable,”

Previous The Solar Revolution: What’s the next step?
Next Terrorists and the Internet: A Solution or a Cause for worry?