Into The Brain Part 4: The Labyrinth of Memories

Before you immerse yourself into the Memory Maze, do check out these:

Racing through the neural networks, we find ourselves inching closer to the labyrinth of the mind which resides within all our brains. This is the vast memory maze, which exists in the form of neural networks and connections. These vast connections and networks are the same ones which form the dense canopy of the neural rainforest which we walked through in the beginning of our journey.

As we ride on this impulse, we wait with bated breath for the labyrinth which blurs the line between the mental and the physical realm. We can’t help but wonder what area of the labyrinth this particular impulse would take us to. We only know of the fact that this impulse is one which originated due to extreme pain, which we understood by gauging the intense magnitude as well as the frequency of the impulse. 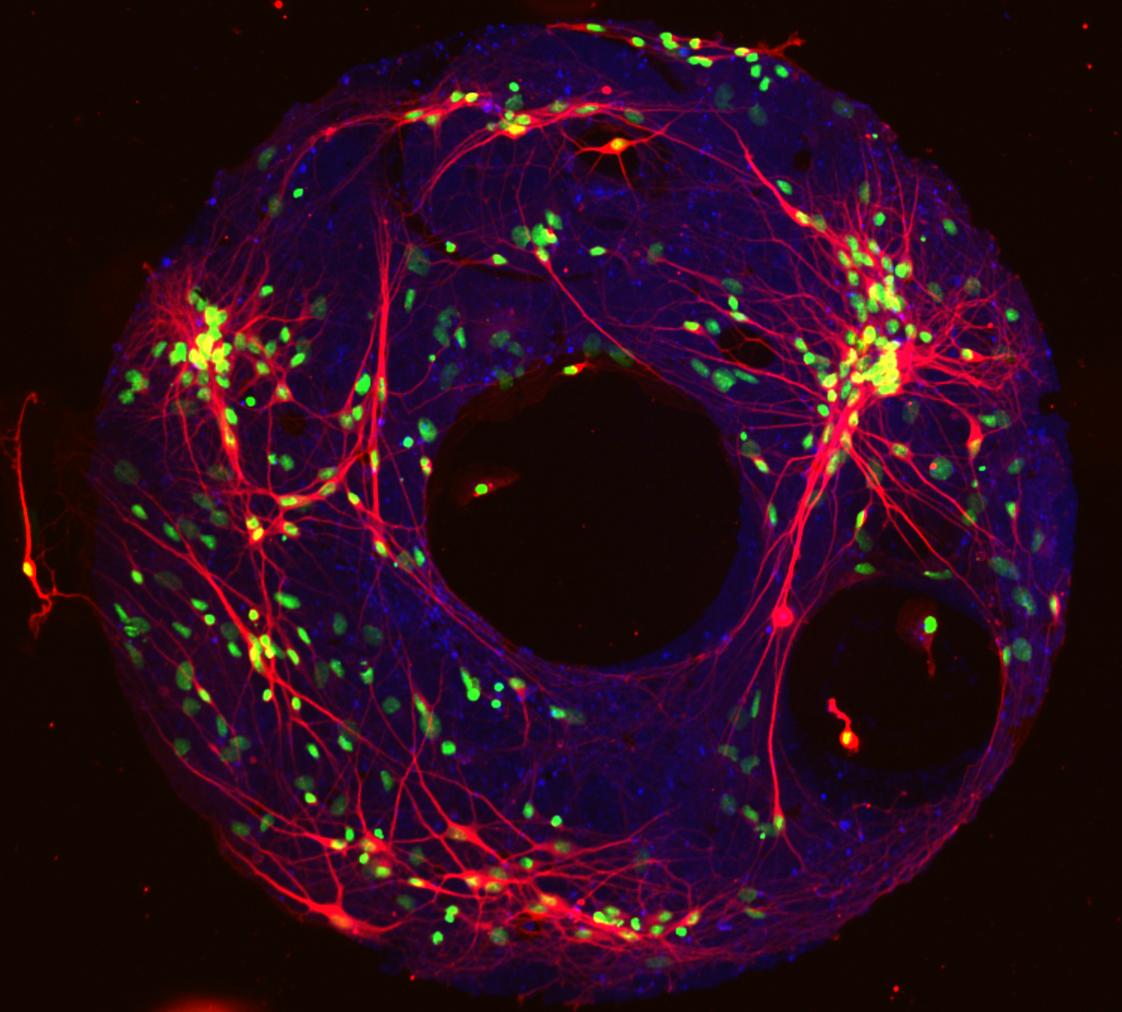 Tripped Out Fact: The impulses in our body which are generated due to pain are transmitted through specialized receptors on our body known as Nociceptors. These pain impulses, depending on their magnitude and intensity have the power to form prominent pathways in the mental labyrinth, creating and reinforcing neural connections related to emotional memories, such as those associated with fear.

Gauging the kind of impulse that we were riding on, we knew that it would take us to one of the deepest realms of the mental labyrinth, essentially to a place where intense emotional memories are stored. As the impulse rode over a large, arching neural trail, we caught a glimpse of the vast labyrinth that awaited us. The sheer vastness and depth of the maze left us in awe and wonderment, which was quickly overcome by a sense of anticipation as we moved into the labyrinth of memories.

Tripped Out Fact: The Labyrinth of memories namely spans the highly developed Neo-Cortex, the seat of rational decision-making capabilities, and eventually goes into the Amygdala and the Hippocampus through the Insula. The Hippocampus is where new memories are made while the Amygdala contains some of our earliest emotionally-charged memories, usually those of deeply repressed trauma. The Insula acts as a relay station between emotional and rational memories.

Tripped Out Fact: The Insula helps us in rational decisions by backing them with an emotional charge from the Amygdala. Hence, it can be said that all our decisions have a highly charged emotional context behind them, derived from the core regions of our brains.

As we meandered through the vast maze of tunnels, the impulse of pain took us beyond the Insula into the deep-seated Amygdala. This time, we were prepared for the shock that awaited us, especially after our stint with the Amygdala in the first phase of our journey. As the impulse started going deeper and faster, we were propelled into a blinding flash of light after which we found ourselves bang in the middle of a vast clearing, lined with a few trees in the distance as the sun shined brightly on us.

Before I could fully comprehend where I was, I heard the sound of feet and panting coming from behind me as I failed to notice the large black dog which aimed straight for my throat, sinking its large canines into my hand as I held it up in the nick of time. The pain from the bite surged like a wave of excruciating intensity through my body, severing my consciousness from reality. As my vision blacked out, a ray of light shined once again as we found ourselves riding on another impulse racing from the Amygdala to the Hippocampus where the connection between the emotional charge of the bite would be registered and strengthened. 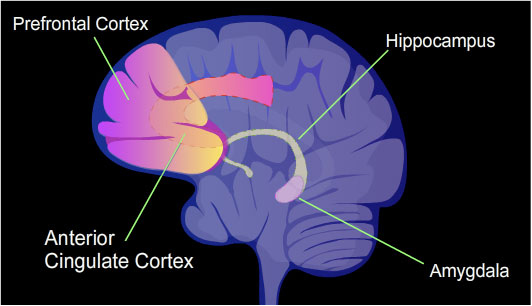 We soon understood that we were in fact traveling through memories on an impulse, but were completely at the whim of the train of thought as it moved from one random memory to another. We soon found ourselves being propelled back into the core recesses of the Amygdala, where the impulse took us to another deep, dark memory stored within the labyrinth.

As the initial brightness of the impulse subsided, I found myself inside a church, facing the cross and a crowd of people at the altar. As I slowly made my way through the crowd, I understood that this was a distant memory from my childhood, which I mysteriously did not seem to recall. As I inched closer to the altar and nudged my way through the crowd of individuals, I ended up staring directly into the pale face of my father who lay dead in a coffin. This memory of mine was so emotionally charged and repressed that I burst out crying right there and ran out of the church.

As soon as I ran out and the blinding rays of the sun hit my eyes, I found ourselves traveling on the nerve impulse again. We were glad to be reunited on the train of thought which continued through the maze, as it ricocheted between random memories. As the impulse was one which was super-charged with pain, it took us to some of the most painful memories that we had registered in our lifetimes.

Tripped Out Facts: In Psychedelics such as Ayahuasca and DMT, the neural connections in the deep seated regions of the Amygdala, Hippocampus and the Insula are heavily affected. This can cause the severing of old, reinforced connections and the creation of completely new ones. This is why people who have undergone Ayahuasca ceremonies tend to re-emerge without prior fears, inhibitions and addictions. But first, they have to face these repressed memories in order to alter them.

As the pain impulse took us mercilessly from one painful memory to another, we chanced upon a path in the maze which was not reinforced and contained some memory which had not been accessed for quite a long time. 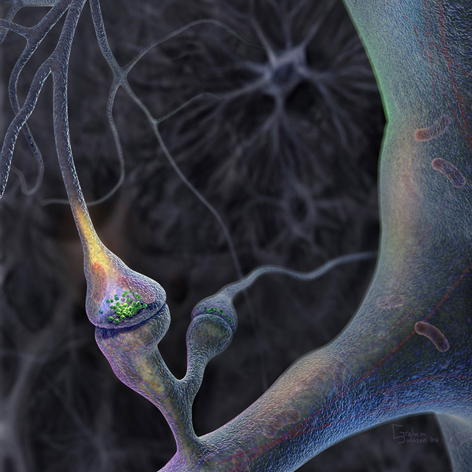 Tripped Out Fact: The number of times a particular memory is accessed, the more powerful that neural connection becomes. This knowledge can help us understand ourselves better and access deep emotional states within us which we did not know existed before.

As the pain impulse rampaged on through the labyrinth, we got off it and headed towards this weakly established connection which seemed inviting yet quite mysterious at the same time. The only flipside was that we could not access this memory until and unless a nerve impulse helped us jump into it. So, we sat the edge of the neural connection and waited for the next beam of light to guide us through.

Eventually, the same rampaging pain-impulse came rumbling through and helped us glide into this new, unchartered neural connection. This impulse pushed us into the blinding light of the afternoon as I found myself sitting at the edge of a cliff looking at the vast expanse of the sea. I then thought to myself (as well as you in my head), “This memory seems quite interesting and peaceful, I think I’ll spend a bit of my time here”.

As I sat at the edge of the cliff and looked at the vast sea, the external reality welcomed us as a whole new frontier. This is our playground where we would be exploring the vastness of the reality that we perceive.

But, what if I told you that this vast reality, with all its grandeur and immensity, is all inside your head?