Cheraman Juma Masjid: Redefining what a Mosque is

The news had spread like wildfire and my ears couldn’t resist the temptation to listen. My sister and her friend gave away enough information for me to pass my commentary.

“That old mosque down the lane is going to let women in for Jummah!” (Friday prayer) My younger sister started squealing as she jumped up and down.

“Oh so does that mean, we get to pray Jummah in the mosque from now on?” Her friend inquired.

“Oh no! They are just opening it for us to see. That’s all.”

I rolled my eyes and from behind the curtains I was ready with my comment, “Women blessed with sight-seeing, they should be oh so grateful to men.”

“Don’t reply to her. Mom says she’s possessed by the Jinn.” (Being made of smokeless fire) My younger sister said before her friend would inquire any further.

I wasn’t possessed by the Jinn, that’s what mom said when she couldn’t answer my rational questions which were irrational to her.

I definitely wanted to see the mosque and there’s no reason they could stop me now.

Next day, the sun tested every woman’s ability of not throwing her hijab on the ground with frustration. We marched the streets and I like any other girl in the crowd was filled with joy to see the ancient mosque which was limited to the eyes of men.

This mosque is sacred to Muslims as it was built by a group of people led by Malik ibn Dinar, who was the first amongst the tabi’uns (the next generation that followed the companions of the prophet)

Cheraman Perumal, king of Chera dynasty, met Muhammad, embraced Islam during his trade and through Malik ibn dinar he sent letters to his family, informing them of his change of faith. He died on his way back but Malik ibn Dinar later built a mosque in the Thrissur District naming it after Cheraman as a tribute to his memory.

This is known to be the most ancient mosque in India and men have had the privilege to visit it 5 times per day but women? Not so much.

After what seemed like an eternity, we entered the main gate and with the crowd, I rushed inside. I am glad, mom was in charge of my little sister today. I walked on the path created to enter the mosque, gleefully. No men were in sight, just for a few hours today, men were not allowed in the mosque, the thought made me happy as if I had my share of revenge.

I pushed the thoughts back of mind, and observed the building, it didn’t have a tomb like those typical mosques, nor any pillars, it rather seemed more like a house. It was renovated but it didn’t lose its essence. 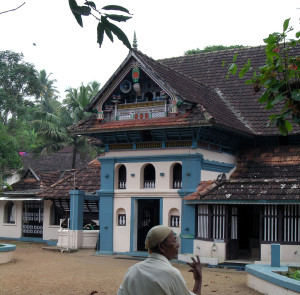 I embraced the serenity that hit me when I stepped inside and my eyes tried to grasp everything they could in this moment as I don’t know if I will ever be allowed to see this again.

The crowd praised the architecture, the beautifully crafted rooftop and the feel of the place. But my eyes were restless, they searched for something or someone.

The crowd grew thicker, making me feel suffocated, it pushed me to a corner and I gave in. I found myself stuffed in the corner and then my eyes, finally rested on an oil lamp. It wasn’t just any oil lamp; it was the believed to be the oldest one around. The elders always said it was a lamp that never stopped burning.

I stared at the flame in the oil lamp, my eyes found peace in doing so and then my vision blurred. But I didn’t feel like my vision was blurred, rather I could clearly see shadows wrestling in the flame, I could hear voices cheering the wrestlers in Arabic! I could see, yet I couldn’t, it was dreamlike. 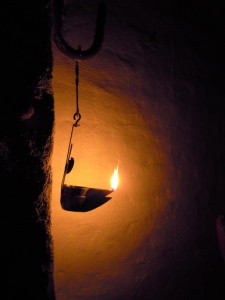 I blinked only to find myself zooming into the scene. I could feel the hot wind blow, the sand grains stuck to their sweaty bodies. Was I in a desert? Mecca or was it Medina?!

Suddenly the adhan (call to prayer) was called out and the same men who were so involved in the match started forming rows and began praying, to my disbelief I was among them! Not as a woman but as a man.

The men were wrestling in the mosque! A place for prayer.

As soon as I uttered that in my head the scenario changed and I was embracing a handsome man. I shook hands with the man and me, not in my voice, but in the voice of a man was uttering shahadah.

“Ahlan wa sahlan wa marhaban!”(Welcome, consider this your home) The man said and pointed towards a small amateur structure, not fully built. And I immediately recognized it, it was the mosque of the prophet, during the Islamic Era.

I blinked and the scene changed again, men and women were praying together, there were no separate divisions, rather women prayed right behind men! It was an open space, nothing fancy like today’s modern day mosques, where people waste tons of money.

I rubbed my eyes harder unable to take my eyes off and saw yet another revelation, I was looking at myself in the mirror. I was a tall and a dark man, taking off royal jewellery.

“I, Cheraman Perumal is nothing but dust! All this is an attachment to what I will leave behind and go empty handed.”

My eyes started tearing up but my gaze was fixed. I either was going mad or was blessed with the glimpse of past. My vision blurred now, I closed my eyes and felt the smoke from the flame surround me, soothing me, whispering in my ear, “Whatever you saw was true. Don’t think I fooled you. You can check in what they call history. I only showed you what used to be the reality.”

I freaked out but found myself frozen, unable to move. I did opposite to what my mind told me, I spoke to the smoke.

I whispered, “You are creeping me out, speaking in rhyme.”

“Everything used to be so authentic in those days, ah! This flame has seen and captured the hearts of men you have never met. But just to confirm Hira, sahaba used to wrestle in the masjid, the men and women used to pray together. A masjid was much more than what people have today made it. People found solace here. The menstruating women used to spend time here, singing and playing. A traveller, a beggar, a disbeliever, people from every walk of life found peace here. This was home. And every Friday it was a community gathering, people spoke about solutions to current problems of the society. Ah, what days! Now only clean women allowed, just to see the place! What nonsense, the prophet would be disappointed! Now women are not allowed because they can cause temptation. Idiocy I say! Why do women roam the marketplace then? There’s a chance for a greater temptation.… The evil in your hearts create the temptation!”

My head started pounding with a headache and as always I wanted things to be in my control.

“Alright. I get it. We are done talking. I want to open my eyes and everything should be back to normal.”

“Ah little girl, everything will be, but will you be back to normal?”

“You don’t have any more messed up things to say now do you?”

“You are a lamp, all this is happening in my head.”

“I am in your head but it doesn’t mean it shouldn’t be true.”

Suddenly I felt like I was falling. I woke up with a jolt, with a herd of women gathered around me. My mom adding to my suffocation, “Her jinn made her faint in the masjid.”

I stood up, steadied myself, wiped the sweat from my brow and ran out of the mosque, not looking back once at the oil lamp or the people. I didn’t realize I was barefoot. I just had one thing in my mind; the library. The library will have all the answers.

Previous My Conversation with Tenochtitlan: Back in time to the Aztec Empire
Next The Eight Wonder of the World: Hagia Sophia 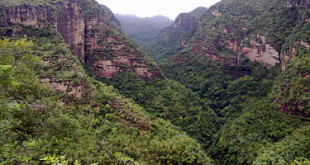 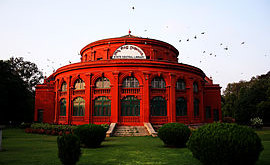 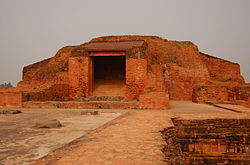