As the aeroplane soars over the sprawling desert in southern Peru, the dull and pale monotony of sand
and rocks keep changing into beautiful patterns of geometric shapes, zoomorphic designs of animals and some other phytomorphic shapes of trees & flowers. All this carved in the form of white lines in the ground by artistically & purposefully removing the reddish pebbles of iron-oxide that cover the desert such that the light-colored Earth beneath is exposed. 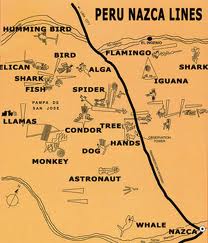 Tripped Out Fact: The mystery deepens as we understand that this neat artwork is thought to be created between 500 BCE to 500 CE in an organized way for some unknown higher purpose in such a masterful way that the designs are naturally preserved till date. Another great mystery about it is that these shapes are properly visible only when you’re either aerial bound on a flight or climb the foothills surrounding the region.

Rectangles, triangles, trapezoids, swirls, and straight lines, are all there. Some of the swirls go on to forge more distinct shapes: a spider, a hummingbird, and even a monkey.

Tripped Out Fact: The largest geoglyph is a 935-ft long Pelican.

Ever since they became widely known in the late 1920s, courtesy the introduction of commercial air travel between Lima and Arequipa, a southern Peruvian city, the mysterious desert line drawings—known as the Nazca (Nasca) lines—have intrigued anthropologists, archaeologists, and almost everyone fascinated with ancient cultures and civilisations. Hordes of scientists, for just as long, have inflicted innumerable interpretations on the lines, as if they were the biggest set of Rorschach inkblots ever. Over the past century, the lines have been explained as irrigation plans, Inca roads, images to be awed at from hot air balloons and a hundred other things. Conspiracy theorists, most laughingly, even claimed the lines to be landing strips for alien space-crafts.

Toribio Mejia Xesspe, a Peruvian archaeologist, was the first to report and study the lines in details. He

came across them in 1927 while traversing the region on foot. Later, in the 1930s, as air traffic intensified, the lines became more popular, eventually attracting an increasing stream of tourists.

After the end of World War II, German mathematician and archaeologist, Maria Reiche, carried out the first formal survey of the figures and lines—known as geoglyphs—outside Nazca and in the neighbouring town of Palpa. For more than half a century, till her death in 1998, Reiche played a key role in conserving the geoglyphs. But her own theory—that the lines represented settings in some astronomical calendar—has been mostly negated by later experts. Throughout her life, she fiercely protected the geoglyphs from over-enthusiastic tourists and outsiders, and that ferocity has been passed down to the caretakers of the lines today. Even scientists and archaeologists have a tough time getting access there.

Much to the efforts of Reiche and her creed, the Nazca geoglyphs were declared a UNESCO World Heritage Site in 1994.

How were they made?

The lines were etched on the ground by removing the surface rocks and exposing the earth below to project a “negative” impact. The rocks that cover a major part of the desert, have weathered and oxidised, and now sport a deep rust colour. When 12-15 inches of rock is scrapped from the surface, a high contrast but light coloured sand is exposed. Near absence of rain, coupled with wind and erosion, have exposed the designs that have largely remained intact for the last 1500-2000 years.

Some parts of the pampa—vast open lands—resemble a well-used chalkboard where lines overlap each other. The designs are cut by straight lines of both the ancient and more modern variety.

suggested the lines to be astronomically significant. He believed that the plain was a giant observatory. He, in fact, labelled the lines as “the largest astronomy book in the world.” Later, American astronomer Gerald Hawkins, tested Kosok’s theory in 1968. He used a computer programme to calculate how many lines coincided with an astronomical event of importance, and showed the number of significant lines to be the same as that would have been by pure chance. His findings largely concluded that that the geoglyphs were unlikely to be an observatory.

But perhaps the best theory for the lines was mooted by English explorer Tony Morrison, who researched the old traditions of the Andes people. Morrison discovered that a tradition of wayside shrines was linked by straight pathways. Faithful Nazcans would move from one shrine to another for prayers and meditation. A shrine was often as simple as just a heap of stones. He suggested that the Nazca lines served a similar purpose but on a much bigger scale, and the symbols could have served as special compound for religious ceremonies.

Archaeologists Steve Mabee and David Johnson, suggested a theory in 2001 that the Nazca lines could

be related to water supply. The Peruvian desert, no wonder, is one of the driest places on Earth. Johnson, while hunting for water sources in the region, came across ancient aqueducts—puquios—that seemed to be connected to some of the lines in the geoglyphs. It led him to believe that the shapes could have been a giant map of water sources trapped beneath the earth. Mabee is still working to collect evidence that may confirm the belief.

Other scientists, however, are more sceptical. Nonetheless, they agree that in a region where finding water sources were crucial for survival, there could be some link between the ceremonial purpose and water. National Geographic Society anthropologist, Johan Reinhard, found that Bolivian villagers walked along a straight path to the shrines, all the while dancing and praying for rain. Something similar could have been followed in the Nazca lines region.

designs. Flying over the hills of Pampas de Jumana and the El Ingenio Valley, pilot Eduardo Herran Gomez de la Torre, spotted a geoglyph that resembled  a 196 feet long snake and a camelid—almost like a llama—above an unidentified bird. His finding was recently reported by El Comercio, a leading Peruvian daily.

The most outrageous theory about the formation of the lines, was propounded by Swiss author Erich von Daniken, who first claimed that the lines were landing strips for aliens. He said that aliens landed at Nazca at a time when humans were just evolving from primitive beings. Daniken claimed that the lines on the desert were gouged by spacecrafts from outer space. It’s a waste of time to debate on his claims, as it falls into the same category of conspiracy theorists who love to believe that the Pyramids in Egypt were the handiwork of interstellar beings. Even allowing a reasonable possibility that aliens may exist, the Nazca soil is far too soft to be a landing strip for an aerial vehicle. Daniken also failed to explain how the animal drawings were created.

So why were they formed?

That’s one question which will probably remain unanswered for many more years. There are dozens of

theories and not one has any solid evidence to point to a conclusion.

appreciated from ground, but only from air? Maybe they were meant for god’s eyes only, as some offering. The Nazcans were a deeply religious tribe. Much of their life revolved around agriculture. Their very existence depended on it and they wanted to insure god’s will.

Or maybe there was a more pragmatic purpose of the seemingly pointless lines. One that demands more research and investigation. One that we may never come to know.

Foodie, lazy, bookworm, and internet junkie. All in that order. Loves to floor the gas pedal. Mad about the Himalayas and its trekking trails. Former life forester. Also a reluctant columnist and editor
Previous The Red Rain of Kerala: Freak Weather or Alien Invasion
Next The Unexplained Death of Elisa Lam: Ghosts, Illuminati or Mental Projections?