What would happen if we stopped sleeping?

What would happen if you stopped sleeping right now? How would this affect you?

We have all been to that zone, the land of no-sleep, where one finds it increasingly difficult to keep up with reality. The state of sleep-deprivation is an intense state of being if it is one you frequently stay in. Science has been able to point out different phases within the state of sleep deprivation, through which it has been seen to be a progressive cycle which involves effects on both the mind and the body. Surprisingly, the immediate symptoms of sleep deprivation, which usually occurs after about 11 hours into the waking state, involves a phase of energized perception. This is because the mesolimbic system inside our body activates and causes the release of the hormone Dopamine within us. This helps in providing bouts of intense energy, such as the surges of energy which you can feel after a cup of good strong coffee. Moreover, you will also experience increased levels of sex drive, which is essentially caused due to the increased levels of Dopamine inside your head. This phase of energized being slowly changes into a more negative and counter-productive state of being, characterized by the onset of headaches as well as effects such as lack of luster in the skin, dark circles beneath the eyes and an overall sense of emotional and mental lethargy. The scariest, yet kind of interesting part about sleep deprivation is the fact that after about three days of continuous deprivation, you will also start hallucinating. 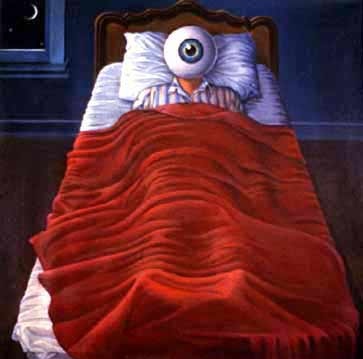 The process of sleep deprivation essentially serves as a cycle, where there is an inherent rise in energy and a subsequent fall, which continues until the brain eventually runs out of gas. The worst part about this is the fact that sleep deprivation essentially involves the brain demanding more and more energy from the body, owing to which physical symptoms are seen. Moreover, these physical symptoms inherently play a role in destabilizing the mental thought patterns which are produced by the brain, hence causing a barrage of seemingly random and energy-expensive mental patterns. One of the most important aspects about sleep is the fact that it involves the deprivation of one of the most important and essential natural processes in our lives. Sleep is essentially the time when your brain goes into superhero mode and helps you sort through the memories that you accumulated in your head during the day. This process essentially helps us in deciphering and making sense of our thought processes so that the next day you wake up as a blank slate, free of all kinds of negative thought patterns. Sleep is also a part of our inherent Circadian rhythm, as it is part of a cycle which is necessary for living organisms to process their thoughts and rise anew with renewed energy each day. If we ignore this essential aspect of our inner natural rhythms, we are inadvertently tending towards serious mental and physical ailments, which may even lead to death in very extreme cases.

Previous Where did music theory originate from?
Next What is Personality? What are the different types of Personalities?