A lot’s been going on and as we approach winter, we are getting a really good gauge of how the teams are going to fare this season. It takes a lot for a team to move from phenomenal to mediocre. This helps to understand the issues related with the physicality of the game in the league. Manchester City are not looking great with the recent drop in form and hence points, but resurrection started by Sergio Aguero says a lot about the calibre and tenacity of the team. Arsenal had one of the best days humiliating United and climbing on top of them in the league table. Chelsea seem lost after 8 games in the league, they have just 8 points and with Mourinho resigning, they seek impetus to continue their strife towards a champions league spot.

City lost a game away at Juventus in the champions league and subsequently got beaten by West Ham and Spurs in England. Their drop in form was characterized by some lack luster efforts in defending the recent week which saw United take the top spot for a brief period of time. But they came back in their last match where Aguero scored 5 times within 20 minutes. Though Toure and Kompany may not be available for the next match but Bournemouth have been less than impressive in their last 2 outings I do not think that this will be a mountain to climb. They have United coming up after Bournemouth which will be the real test but I haven’t forgotten how they rubbished Chelsea aside at the start of the season. Pellegrini might wish to rest Kompany, Toure and a few other players even if they are fit for the game on 17th but United do not look so good either. Aguero will be out for a month and Silva will be out for 3 weeks which is the real concern for them right now. Both of them are set to miss the Manchester derby. This leaves them with a depleted attack that could help united find their form back.

Arsenal played the game of the season in the first 20 minutes of the match to finish-off Manchester united with a triple blow that they couldn’t recover from. The best part about the goals was the fluidity in the movement. All the 3 goals were absolutely class and all their top players did a great job this match. Walcott is really improving as a striker and always gives an interesting option when counter- attacking. But for me, it’s the off and on form of Ozil that seems to be a huge issue with them. Sachez has been a revelation for the North London club and the fans love that man! Defensively they looked secure for the first time this season (also credited to the fact that United look toothless in attack). Wenger’s team climbed on top of United into the second spot thus announcing their arrival as title contenders. But there is a long way to go and keeping up the form seems to be a huge issue for the team. This being said the signs of them doing well this season cannot be understated.

United are third in the Premier league at the moment and had to face the ignominy of going down 3-0 to Arsenal last week’s premier league match. What baffled me the most was that they never looked like scoring and the body language of the players was so poor that if I were in Van Gaal’s shoes I would have been livid with them at half time. Ashley young at left back is the worst decision any manager in the world can make and I do not understand how long it will take for Van Gall to realize that there needs to be a defender not a midfielder playing in the squad. Playing Arsenal at Emirates was taken too lightly and almost all of the goals were built up from the left of the field. Rooney looks clueless again and it looks like another season of expectation for the “Wayne Rooney Fan Club” that is going to go in vain if he does not get adequate service. The only promising thing about all the games that United have played in the recent past has been Martial. He is very good on the ball and shields the ball really well. This coupled with electric pace ensures that he is a force to reckon with. I hope Depay finds 1/10th of Martial’s form because theres almost nothing happening for him at the moment. All in all, it was a bad week at office and playing Everton at Goodison Park followed by City at home seem really difficult matches after getting humbled at the Arsenal.

Chelsea have a crisis at hand and with all the talk about Jose’s future it is not getting any better for them. 8 points from as many matches is not the Chelsea side we know and look at the names out there, Pedro, Costa, Willian, Hazard, Oscar, Cahill, Terry… I can list all their players and I am sure most people who even have the slightest inkling towards the sport will recognize their names. The defence has totally gone haywire and Jose who has a reputation of securing his back line before worrying about attack, has started the season on very shaky ground. Ivanovic and Terry look clueless as they move with mediocre pace and this gives an opportunity to get past them pretty easily. Zouma has been effective on a lot of occasions but there have been some terrible mistakes that have resulted in them conceding at least 5-6 goals this season without the opposition trying too hard. Almost all the matches that they have lost are due to really poor marking and being in the 16th place this season only shows how bad they have defended. In terms of attack, I have been very disappointed by the amount of moves that Hazard has been involved in. He is a very important part of the Chelsea squad and him not firing is taking a toll on their goal scoring as well. We know that with a team like Chelsea It is just a matter of time before they find their form. But it looks like they are going to be busy in the winter transfer and get some defenders in to give solidarity to the defense. Aston Villa is next for them and after the break it is an ideal match to have at home.

Previous YouTube Youniverse: News Series 102- Vox
Next Into the Brain: The Neural Rainforest 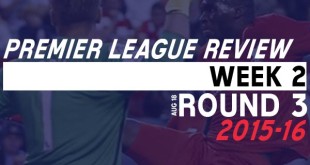