Welcome to the Premier League Review by THC Labs. There were lot of surprises in this weeks round of matches. But before we get into all that…… ( take a deep breath) “IT HAS BEGUN!!!!!”. The premier league has kicked off and this year it feels like its bigger than ever because of the money that the premier league has pumped into new signings. The top 4 places are anyone’s for the taking and with the first round of matches I will just substantiate my statement.

UNITED MANAGE TO WIN WITHOUT SCORING !!
The premier league kicked off with United playing against the Spurs. This game was a boring affair if you are not a fan of either team but if you are a united fan ( Glory Glory Man United!!) I am sure Darmian should be in your next fantasy team. United were not in control completely of the match at any point of time, but there were a few noteworthy performances from Schniedelin, Smalling and Darmian. Harry Kane kept getting drawn backwards thus not being able to make those intelligent runs into the centre . Take a look at Eriksen’s miss from the match. The goal itself was a scrappy one and Rooney I thought, waited too long on the ball. It was an own goal in the end that separated the sides. Otherwise defensively, United did well and plugged the gaps well but there was little to offer other than odd half chance. 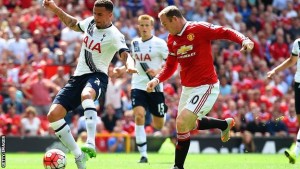 CHELSEA HELD TO A DRAW AT HOME !!

The other big game was Chelsea playing Swansea and time and again big teams have played Swansea having a lot of trouble dealing with their pace and power. Chelsea found it out on Saturday when they were held to a 2 all draw at home. Chelsea scored the first goal of the campaign with an Oscar free-kick. Immediately within the next 10 minutes there were goals on either side. First for Ayew, which leveled the match and then Willian for Chelsea with a lucky goal deflecting off the defenders calf. But Swansea kept fighting and around the 60th minute a beautiful lofted through ball by Shelvey found Gomis in acres of space. Courtois was caught off guard and aimlessly ran to take him down resulting in a red card. Gomis converted the result that didn’t go down to penalty. It was an amazing match with the fight going right up to the wire. But it was a really spirited performance from both sides though Chelsea would be very disappointed to start without a win. They lost the community shield trophy to Arsenal and have Manchester City next which is not likely to be easy.

Yaya Toure is a man on a mission. Two goals in the opening day and City look like the team to beat right now. A header from Kompany plus a brace (2 goals) from their midfielder gave them a comfortable 3-0 win. They looked sharp all through the match and if you are building a Fantasy team take a good look at them. The midfield looks solid and attackers look sharp. But they looked very good and comfortable in defense that made it tough for Wes Bromwich to find any space. They have a strong side and are facing Chelsea next. It is going to be one hell of a match!! DO NOT MISS THIS!!! Its this weekend on Super Sunday.

Arsenal lost to the Hammers in the Emirates and Arsene Wenger is under pressure again. This is not because they lost, they got outplayed. With the squad that Arsene has this season, we should expect a lot of fireworks but for now, they lose. I think that both the goals were conceded due to lethargic goalkeeping. But I am pretty sure they have it in them to come back and fight for the champions league spot if not making it to the top three itself.

Liverpool vs Stoke was a keenly contested match with chances going to either side. But right at the end, Cutinho produced a moment of magic shrugging off his defender and then turning to score an absolutely terrific long ranger. But defensively they did not look convincing and this creates a lot of space for the strikers to exploit. If one of the top 4 sides were playing against them, they might have not had a clean sheet. But the young defender Gomez just bought in this year provided timely intervention when called into play. They can take a lot of positives from the game and now that they are all fit and ready to go, it is just time before the glorious days of Liverpool might return.

Mark Albrighton, a youth academy export of Aston Villa played an amazing game for Leicester against Sunderland. Maharez scored 2 goals including a penalty to seal a 4-2 victory over Sunderland who looked very shaky when defending. Everton had a very interesting 2-2 scoreline with Watford and although it was not a good result for Everton, they will definitely look forward to more attacking intent from Barkley and Kone at the top of the field to score more goals for them.

HIGHLIGHTS OF THE WEEK.
Yaya toure scores a beauty for 2-0 :

Previous THE BIZZARE SPORTS THAT LITERATURE GAVE US (NOT, THANKFULLY!)
Next Can Steven Smith help Australia rise from the Ashes?