She sits up bolt upright,

in the middle of the night;

something at the back of the mind stirs,

A stranger and strange murmurs!

She looks around in the dark and checks,

and is somewhat glad of her loneliness;

she confirms, no one there,

but the dream returns….

suddenly she feels naked and bare!

Stunned as if, for a moment she sits,

in her bed….motionless….at the brink of a fit;

suddenly springing up, she almost runs to the door, 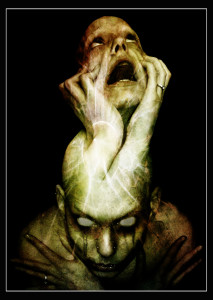 checks all the bolts and locks,

breathing heavily she collapses to the floor.

They seem to come alive under her stare, the locks;

she continues staring at them, alert and aware,

as if coming to her sense, she gets up,

turns towards her bed and runs her hand through her hair.

What it is, for the first time she realized its fear,

before she can stop herself, she gives the door a second chance;

gives herself a shake and says aloud there is no chance.

And then, as if gravity pulls her down again,

the whole notion of her fear hits her and she can’t help it;

what she was trying hard not to think about,

rushes into the head like someone yelled it out loud.

Ashamed at herself for being afraid,

tears she fights back, gets up and walks to the bed;

counts herself to sleep.

An hour later as she rests,

the stranger comes out from behind the curtain,

leering at her slowly heaving chest!!!

Previous The Levels Theory
Next Are we music…?