As discussed in this article, Pluto & Charon are in fact one planetary system! They together behave like one planet around which other moons Styx, Nix, Hydra & Kerberos revolve. The center of mass of this planetary system lies in the space between Pluto & Charon and this means they are constantly engaged in a wobbly dance around each other. This spiraling dance is what essentially drives the binary dwarf system to revolve around the Sun.

As discussed in this article, our Sun is a 3rd generation star born from the remnants of some 2nd generation star. It has siblings as well which have similar information as the Sun but we do not know where they are. Till youth, Sun stayed with its siblings & then started drifting along with its planetary disc to its current location in the Milky Way.

As discussed in this article, the conditions of Titan are almost similar to the Earth of the initial years before it condensed & developed an Ozone layer. Life on Earth is speculated to have started from ‘Archaebacteria’. There still are some types of archaebacteria which survive in extreme conditions. These extremophiles grow in conditions that resemble to those on other planets or the primordial Earth and can give us a perspective on the origin of life.

As discussed in this article, this is caused by a star called ‘Nemesis’ which disintegrates every 26 million years and releases a barrage of comets from the fringe of our solar system. A large part of these comets attack the Earth & cause large dust clouds and heavy bouts of global death. The Universe has its rhythms & calendars; it is important for us to understand this rhythm and tune in to the same as an integral part of the Cosmos.

As discussed in this article, we call the media, government, politicians and the puppeteers of nations, religions & law as the so-called ‘Elite Few’. These ‘Elite-Few’ have artificially selected characters like fear to be the essential driving force for generations to come. This has been a calculated move in order to ensure that humans become mindless slaves to their propaganda & keep on consuming in order to satiate their fear & self-indulgence.

As discussed in this article, you can actually survive without food if you just indulge more often in to Sun gazing. The practice of Sun gazing has been attributed with the power to give the practitioner superhuman abilities. These include psychic abilities, telekinesis and speculatively even the ability to fly!

As discussed in this article, planets start their life inside of a star as the outer part of the protostar globule. This outer part is then under gravitational pressure collapsed into a ring surrounding the star & this ring goes on to become planets. We are made of exactly the same basic elements as any of the stars we know. We are star stuff.

As discussed in this article, stars are reborn from their own remnants. In this process, no information is lost and the new generation stars already have the information that the past generation star gathered throughout its lifetime. The Cosmos as we know is evolving towards novelty in terms of ‘Information Complexity’.

Previous Star Trip #3: Rebirth of a star; resurgence of the information!
Next Down the reverie maze 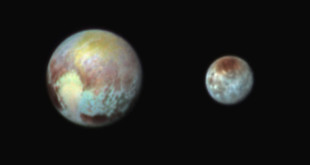 The Dance of Gravity: Pluto and Charon