Life came into existence one billion years after Earth’s formation when the crust cooled enough and gases were formed. Hydrothermal vents acted as a cradle for Earth’s life. And it is a well-accepted theory that single-celled ‘archaea’ were the very first organisms on Earth.

Let me introduce first the term – ‘archaea’.  The word archaea is derived from a Greek word ‘archaios’ meaning ancient or primitive. This word was used for the very first time in 1990 to shorten the term ‘archaebacteria’.  Archaebacteria forms a group of organisms that are believed to be the most ancient organisms in the world. Life on Earth originated as archaebacteria. Archeal fossil records found in Isua district of west Greenland are the oldest known sediments on Earth at about 3.8 billion years. Archaea were discovered as extremophiles, which means they appeared at a time when environmental conditions were inhospitable for most life-forms that we know. Extremophiles grow in conditions that resemble to those on other planets or the primordial Earth and can give us a perspective on the origin of life.

Lets reflect on five such extremophiles that you wouldn’t have thought existed in current world. 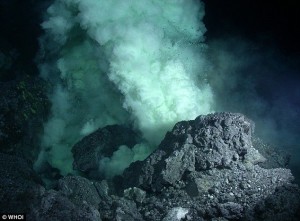 This particular archaea can only survive under extreme conditions of pressure, readings at which other forms of life would utterly perish and fade. Pyrococcus CH1 is a peizophilic hyperthermophile, meaning that it requires environments of extremely high pressure and temperature. It was first discovered in a hydrothermal site on the mid-Atlantic ridge at a depth of 4100 metres. When isolated in a culture, it was seen that this organism could not survive in an environment with normal atmospheric pressure. The pressure and high temperatures on Venus are suitable for the growth of organisms like Pyrococcus CH1.

Geogemma barossii is the only organism on Earth that can live at a temperature of 121 degrees. They can endure temperatures up to 131 degrees. This organism was originally discovered in a thermal vent within the faulty towers complex along the Juan De Fuca ridge in the Pacific Ocean. The energy source for this organism is, surprisingly, iron.

The optimum temperature for growth of these archaeal organisms is 82 degrees.

This species was found in hydrothermal vents in east pacific rise of the Pacific ocean, 2600 meters below sea level. Marine biologists observed methane gas oozing out in such vents and asked if life-forms could exist in these environments. They found out organisms that used hydrogen and carbondioxide for metabolism and produced methane gas as a byproduct. These organisms were later identified as archaeal species and classified and named accordingly. These species do not like oxygen and cannot survive in a medium containing oxygen.

This species of archaea is classified under a group called Halophiles. Halophiles are salt-loving organisms and thrive in high salt conditions. Haloquadratum Walsbyi is the most halophilic organism known (hyperhalophilic). This organism was discovered from a salt-pool near Red Sea for the first time. These life-forms live in extreme salt concentration and have peculiar characteristics such as gas vacuoles that allow them to float and the ability to absorb very high UV radiation. They are now identified in salt lakes across the world. Most hyperhalophilic organisms are very fragile in nature.

Organisms classified under the family of sulpholobus utilize sulphur in order to synthesize the compounds which it derives energy from. In a way, what carbohydrates and oxygen are for us, sulphur is for Sulpholobus. One of the most interesting species of these kinds of organisms is Sulfolobus solfataricus, which thrives at temperature ranges between 80-85 degrees. This organism utilizes elemental sulphur and releases sulphuric acid, the energy from which is used to break down carbohydrates.

Know more about the lovers of sulphur here

Previous Dark Matter and the Human Psyche: A Song of Fire and Ice
Next Star Trip #2: We are no different from the Stars!