Where are stars born?

Stars are born in Stellar Nurseries which are basically huge clouds of gas & dust. Light cannot penetrate the stellar nurseries & we do not know what exactly happens there. But there is some information that is being given to the stars here before they are just thrown out of the nurseries as baby stars.

Now these Stellar Nurseries produce stars in batches. There could be 3-4 or even 7-8 stars in one batch, creating a constellation of stars. These stars stick & stay together until they reach their youth. This is generally some millions or billions of years. Till then they attract freely roaming rocks & gas clouds in the space around. They constantly fuse all the accumulated Hydrogen atoms to Helium, this process releases photons of light and that is how they twinkle & shine.

Now in their journey of childhood to youth, or during the formative years, a star’s main aim is to gain as much nuclear fuel as it can. And it gains that by gravitationally attracting the rocks & gas clouds around.

Once it reaches its young age & already has a lot of energy in terms of nuclear fuel (Hydrogen atoms), gravitational imbalance between the same batch stars who stayed together since their birth starts to rise. So if they stay together any further, they would eat each other up.

Tripped Out Fact: Our Sun is a 3rd generation star of The Milky Way, our home galaxy. If we fit the complete Cosmic Calendar of over 14 billion years in one year, then the Sun wouldn’t be born till August. And our Sun as well has some siblings it grew along with. These siblings were probably born with similar information as our Sun and could be nurturing planets like Earth and even life in different part of the galaxies. However, we do not know where the siblings of the Sun are. They could just very well be towards the other end of the galaxy, far away from our reach.

Now as these stars approach young age & start drifting away from each other, they attract some more rocks & gas clouds on the way. It consumes some of them whereas some stay at a safe gravitational distance such that they end up revolving around the Star forever (or rather till the Star allows them to). The process of building a family of its own has started for the Star. 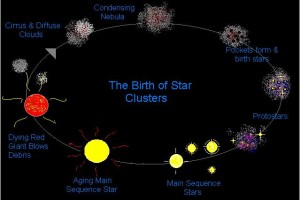 It is believed that the 1st generation stars initiated fusing Hydrogen in to heavier elements like Carbon, Oxygen, etc. which are required for planets & for life. This information since then has been passed along to all the new generation stars like the Sun.

In part 2 of this article series on Star Trip, we will discuss how a Star builds its family & how it exchanges a lot of information with the Planets & Moons of its family. And more importantly how it protects its family from the dangerous cosmic rays which could penetrate in to Earth’s surface & our bodies like bullets if not for the Sun & its electromagnetic field/shield. We’ll understand more from the perspective of the Sun.

How does the Sun protect, raise, nurture & pass a lot of information it gained from the stellar nurseries to the planets & moons of its family?

How much the planets are in synch with the Sun?

What kind of communication happens constantly between the Sun & the Earth?

How would the Sun die & what kind of a singularity would arise on the Earth through that?

Stay tuned as we answer these over the next two articles in the series.

Previous You-niverse
Next Dark Matter and the Human Psyche: A Song of Fire and Ice