Star Trip #2: We are no different from the Stars! 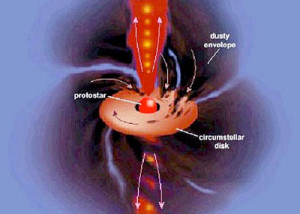 No, they start as one unit. As it comes out of the stellar nursery, a star is at this stage a huge ball of dust & gas, called a protostar.

The core of this protostar is very dense & gravitationally collapses the outer part of the ball to form a disk revolving around the core; imagine the disks of Jupiter or Saturn. The slowly rotating globule of the protostar eventually collapses and forms a protoplanetary disk & core. The central core here becomes a star and the protoplanetary disk goes on to become planets.

Once young & full of energy, our Sun started drifting towards its current location in the Milky Way galaxy from the place which was its home as an adolescent. On the pathway, the Sun started accumulating even more energy for itself & helped the other planets as well to be what they currently are.

The planets had to endure extremely harsh conditions in the initial years. However, once they condensed, the Sun started its experiment for information complexity.

My main theory here is of information & specifically certain information that was provided to the Sun & the planets from inside of the stellar nursery. And ultimately light is what brings information to me, I can see you only because light brings you to me.

And we humans can just comprehend a very small fraction out of the whole spectrum of light. We can not see even infra-red or ultra-violet light. A lot more light is incident on the Earth. Constant exchange of light means constant exchange of information as well. And you cannot rule out unconscious for storing & processing information. Stars actually drifted & acted based on the information that was provided to them. At the smaller scale, Mountains & Oceans might be unconscious but they have crazy amount of information stored. Whatever we know about the geological history of the Earth is through the Mountains & Oceans. Different layers tell you the story of a different era or eon. And all this information is preserved for so many years for conscious beings like us to understand it and as a way for the Earth to understand itself as well.

Now once settling down in one of the spiral arms of the Milky Way galaxy, the Sun started its experiment for complexifying the information within its lifetime as its contribution to the stellar nurseries for the next generation stars. Let us understand that no information is going to go to waste. Each star is going to die with a final blast which will leave all the information it gathered throughout its lifetime for the next generation star.

Now the Sun exchanges a lot of information with all its planets in the form of light; like we communicate to different parts of our body through our brain chemicals. Information in the form of light was aptly received by the Earth, in a more constructive way than the other planets as the Greenhouse scene worked out perfect with the Earth. This helped the Earth build a protection layer of its own in the form of the Ozone layer which was formed 2 billion years ago and helped massively in the information complexifying scene of the Earth. With this new development, Earth could just play around in itself, produce different life forms & protect them as well on its own.

In the initial years of its formation, Earth had a mattress on its surface in the form of microbes who took in CO2 & pumped out Oxygen constantly. This process produced enough Oxygen for life forms to complexify further.

We are an example of what molecules can do given 4 billion years of evolution. We come with a legacy of 14 billion years & it is our choice to feel one with the unit of Sun & its planets or to destroy  the same in the pursuit of meaningless destruction of the planet in terms of war, propaganda & power.

Death of the Sun:

Our Sun will die in about 5 billion years from now. That would be a singularity on Earth. The Sun would become a red giant in its old age and there would be a red screen all around us on the Earth. Perhaps we would see no sky or no other planets or the singularity could even be so strong that there would be a red screen between two people sitting a few feet apart from each other. This would go on for some years post which preparing for its final blast, the Sun would eat & savor Mercury, Venus & Earth. The final blast of the Sun would release all the information the Sun & the Earth would have accumulated till then. That will again form a stellar nursery from which 4th generation stars would be born. This new generation would already have the information the Sun’s system would have gathered in its lifetime.

We can totally relate the stages of life of a star to our own life. And then we just have an assurance that whatever information we gather in our lifetimes is going to be channelized & preserved by the Earth. And that we are all contributing right here for the next generation stellar nursery. Could we explain the 21 grams that we lose just when we die through this as well? The soul departs in a structured way for the Earth to use the information of our unconscious part in a channelized way.

In the 3rd part of the Star Trip series, we will speculate about the legacy the Sun would leave once it is dead. But for now, let us understand we are ourselves the Sun or the Earth or let’s just say, we were ourselves made inside of the stellar nurseries. We are made of exactly the same basic elements as any of the stars we know. We are star-stuff.

Previous In-Extremis: Microbes
Next The Dance of Gravity: Pluto and Charon