Art is something that stimulates an individual’s thoughts, emotions, beliefs, and ideas through the senses. Recently, I came across Angappan or as many call him AG, who made me realize how art existed but not in the way it should in the lives of people. People don’t appreciate art, they don’t even understand it. He told me about the mega sale they are having where artworks by top as well as upcoming artists in Karnataka are introduced to the people for a much cheaper price of 4500 than the original price of the painting.

The purpose is to spread art not only to those who know art but also to those who don’t know art. It is to reach out to the common people who are not even trying to understand art. To bring awareness amongst the people about how important it is to apply art in their day to day life. AG wants to spread art to every community. For a matter of fact, they had a workshop in a police station so imagine the extent to which they are going.

There are 3 steps in which art can reach to every individual; the first step is to introduce art in people’s life as a stress buster, where they start connecting with art. The second step is getting people to appreciate art. The third step is making people apply art in their day to day life. This does not come under people’s fundamental need so what’s the outcome? It makes life colorful and happier.

I was privileged enough to visit the campus of Chitrakalah Parishith in Bangalore and meet a few artists. One of them, Narayanan Nagarajan, even took time and answered my questions regarding his painting, ‘Past Continuous.’ This is when I was introduced to the various stages in the comprehension of at, through the perspective of an artist. 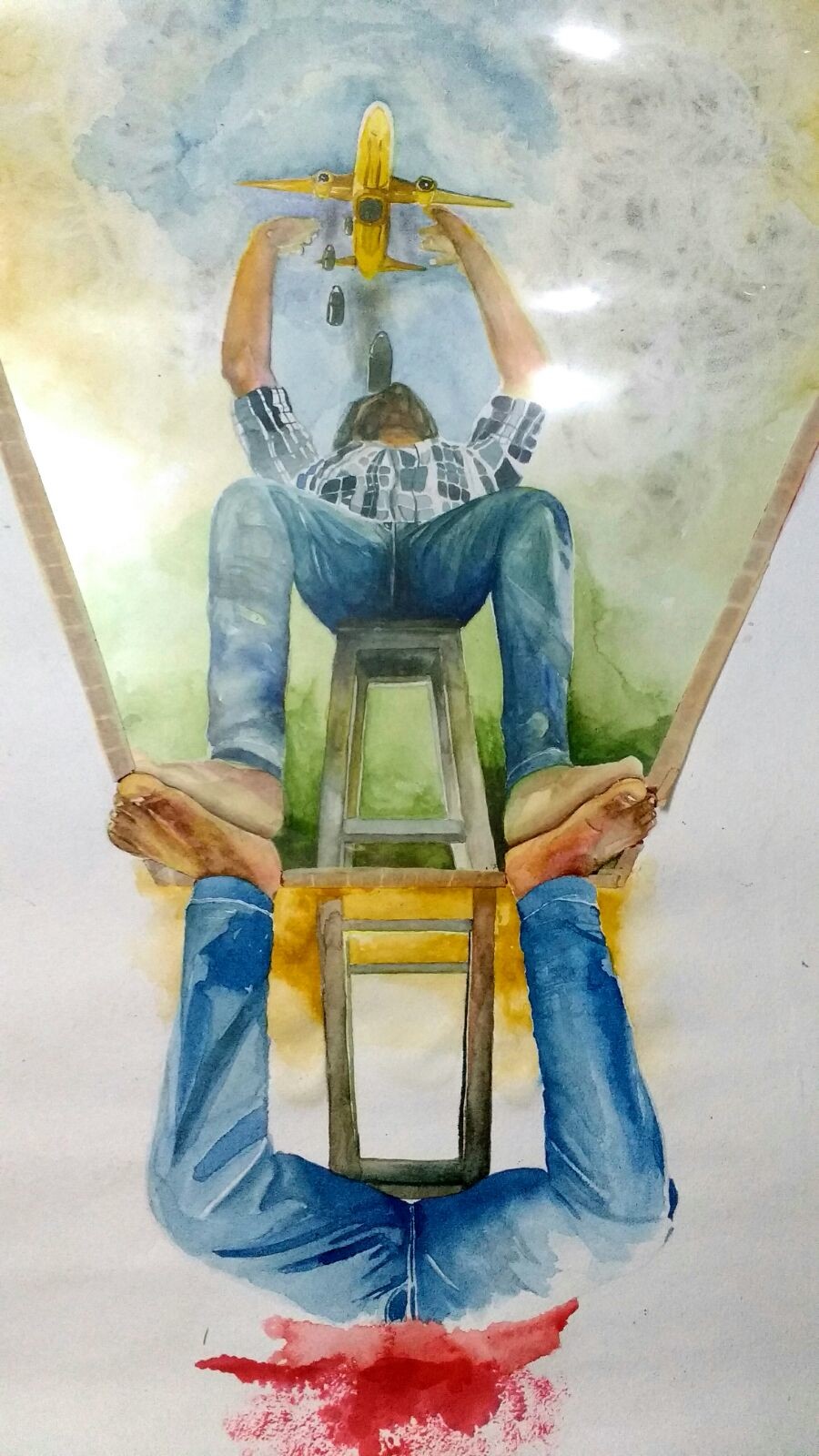 What is the inherent meaning that the painting or artwork is trying to convey?

When I asked this question to Narayan he clearly told me that he’d rather not say as one has to read into it. But due to a shortage of time (read my impatience) I convinced him to elaborate. In the painting, Narayan is seated on a tool with a mirror under his feet. The mirror reflecting him with his gaze turned upwards and hands in the sky, a plane dropping missiles on him, and the upper part of his actual body being mangled, leaving only blood behind. He told me overall the painting conveys that he is not happy with the way the world is. He isn’t comfortable with the way the world is shaped, ‘the societal structure is not okay’ for him. This is painting is about the immense violence that is plaguing the world in modern times. Narayan also told me that he is still deriving meaning out his own painting, and what each section conveys. As he doesn’t plan his painting all that was within him has poured out on paper and he wants to take his time and read into it. The mirror can be also seen as the alternate universe or parallel universe. It can also be the past and the present. There’s always a glass in front of you, it’s clear in the beginning and it starts getting foggier as the time passes and you don’t see the same person as before, an ode to the constant and often explosive ways in which we change as time goes on, or as a tribute to time, the brutal concealer.

What I read into the painting was how the past can be reflected in a detrimental way, wherein dwelling in the past can actually lead to your own self-destruction. This could be applied to deeper aspects of humanity as well, where we dwell on the incoherent violence throughout history and instead of actually acting to change that, strive to trap ourselves in a loop of constant self-destruction.

How have the people themselves received the painting and associated meaning with it?

The response from people is that his painting lacks aesthetic value but according to Narayan, art has to be seen more than its aesthetic value, it’s not just how it looks, and it’s rather why it looks like that. We spend our time looking at the techniques, concluding it is amazing, but there isn’t much to that. There’s a reason as to why every section of a painting is painted in a certain way. The artworks you study, you’ll see how the paintings evolved and they realized aesthetics isn’t everything.

Nobody wants to buy something that isn’t pleasurable for their eyes. 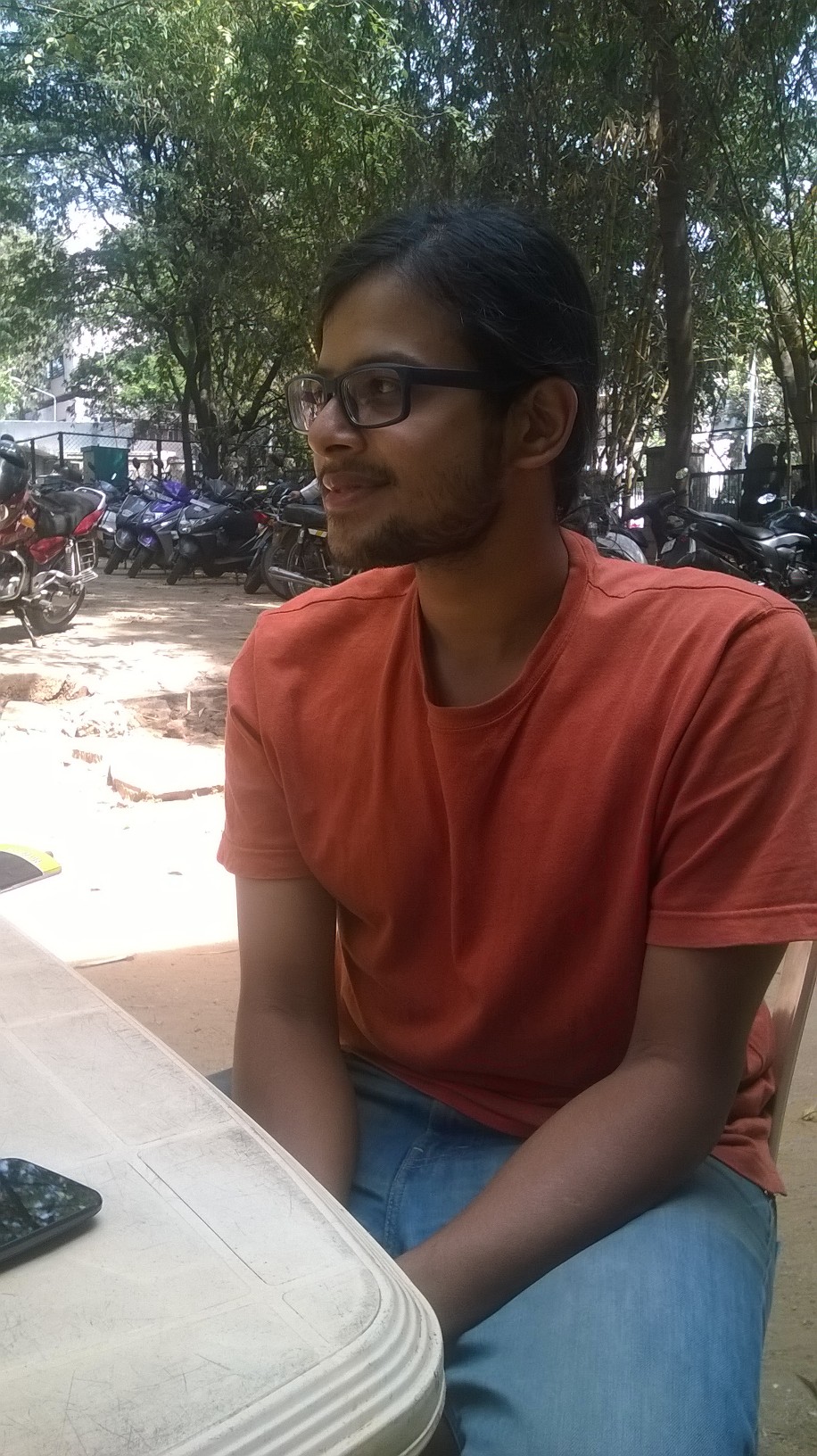 Did you have any perception in mind as to how and what you would want to portray through the art piece before you started to work on it or did it just flow once you started?

He never really has an idea that is fixed; he prefers working on ideas that are spontaneous and this painting was an unplanned idea as well. ‘Basically just scribble. Look at dirt and scribble.’ He doesn’t believe in following the fundamentals at all. He wants to learn from his mistakes in regards to art after he has completed his work and not be interrupted when he is working on it. Being spontaneous and channelizing the chaos that comes with it makes him feel more of an artist than when he plans his works.

This interview is just a gist of what goes in the mind of an artist. There are different types of artists and several different paintings to explore, which will take more than a lifetime. But I am sure it will be worth the journey.

Previous Marina Abramovic: The Artist as a Medium
Next Music and Community: Rediscovering our lost connection with each other