“Food is our common ground, a universal experience’’ – James Beard

Food forms a part of everything around us. From cells of every living organism to the inanimate technological developments of 21st century, from imagination to reality, food is everywhere. How can we ignore then, the presence of food in language expression?

So, let’s spill some beans

‘Spilling the beans’ is figuratively used to say: let out the secret. There are indications that the phrase is based on Greek voting system during the 1500s where a white bean indicated approval and black bean indicated rejection. People had to put the beans in an opaque jar and if accidently the jar dropped, the beans spilled letting out the secret of who has won the ballot. Makes sense, right?

And go Bananas with it

‘Go bananas’ in general means to go crazy. There are a number of speculations about the origin of this phrase, including an analogy with something bent and the slang relation of bent to being intoxicated. However my favourite speculation is the radiated story during 1960s – ‘’roasted banana peels have psychedelic properties’’ (and hence you can go crazy with it). That was a rumour, though.

Don’t be a couch potato

‘A Couch potato’ is a lazy person refraining to leave the place (ideally in front of a TV) he has been sitting on. The term couch potato stems from a phone conversation on July 15, 1976 when Tom Iacino, a TV humourist, said he would rather prefer to vegetate in front of a TV (slang term for TV during those times was ‘boob tube’) than to venture into an exercise regime. He replaced the word ‘tube’ by potato, also classified as a tuber, originating the term ‘couch potato’.

Even if it’s not your cup of tea

Undoubtedly, this phrase originated in Britain and reflects the high regard for tea amongst British people. During 1800s the phrase ‘my cup of tea’ prevailed in English culture and was used in an affirmative tone. For example ‘’She is even more my cup of tea in many ways’’ or ‘’he is my cup of tea’’ suggesting similar likings. The negative connotation of the phrase started during the World War II to emphasize dislikes or distaste and is more common today.

Instead raise a toast

The phrase ‘raising a toast’ refers to raising our drink containers to celebrate events and achievements or as a cultural gesture at parties. The act of raising glasses (and clinking together to produce sound) has deep traditional roots. It started as an honour-giving practice to Gods, emerged as a good luck charm and then gradually became a custom. The association of this act to the term ‘toast’ however, only happened during 16th century when people started putting toast in their wine glasses before starting to drink. Although it sounds absurd, the claim is that putting toast in the wine helped improve the taste and made the wine more palatable. Raising the glass also hence meant raising the toast in the glass and overtime metonymy lead to calling the whole process, ‘A toast’!

Saying cheese has become analogous to asking for a smile when a photograph is being taken. There is no evidence as to why a photographer’s instruction to ‘say cheese’ has become such a customary notion. It can be assumed that probably it has to do with the stretched sounds of ‘ch’ and ‘é’ that makes you smile inadvertently. But there is no clear answer as to why the word ‘cheese’ and not ‘cheek’ or ‘each’ or ‘seas’ or ‘wheels’.

As it isn’t just a piece of cake!

The phrases ‘piece of cake’ or ‘cake walk’ mean easy. It is believed to have originated during the mid-1800s in USA. As a part of usual culture, slaves (the then) used to walk in pairs around a cake in an attempt to imitate their masters. The most graceful couple would win the cake.

The phrase ‘in a nutshell’ means to sum up in brief.  This is one of the oldest food idiom and supposedly roots from a story written in AD 77 by Roman scholar Pliny. At one point in the story it is mentioned that a copy of Homer’s ‘Iliad’ (ancient Greek poem containing 501,930 letters), written on parchment paper could fit into a walnut-shell.

‘’O God, I could be bounded in a nutshell, and count my self a King of infinite space’’– Hamlet by William Shakespeare (1602) 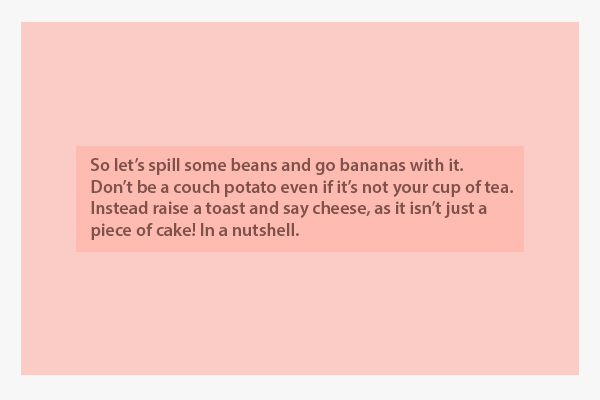 These phrases have become an integral part of our expression. Could you share origins of some more food phrases?