5 Rites of Initiation that would make you thankful for your life: Part-1

Coming of age is an essential and necessary part of every individual’s life. It marks the beginning of the individual’s ascent into adulthood, where responsibilities take the place of childish dependence and desires. Moreover, initiation into adulthood is not easy for most people, due to the immense pressure of facing the world without inhibitions, without judgments and ofcourse, taking responsibility for one’s own life. You will agree that adult life is no child’s play (pun intended). On the other hand, the tribes of the world take the initiation into adulthood far more seriously than we “urbaners” ever have/can.  So you better feel lucky when you read about the various brutal and intense rites of passage that young men and women have to undergo in tribal communities all around the world;

For most of us, the most intense coming of age ceremony that we had to go through was asking your high-school sweetheart to the annual dance. Well, it is not as easy for Maasai boys who will be entering adulthood. A Maasai boy has to typically go through a number of ceremonies in order to essentially initiate his ascension into adulthood. The various ceremonies involve the circumcision (Emuratare) and the head-shaving ceremony (Eunoto). But, the most intense experience the boy has to go through before he is completely initiated into adulthood is the lion hunt. This ceremony, in the olden days, involved a solo warrior going up against a lion.

Tripped-Out Fact: The Maasai only hunt lions and not their female counterparts, owing to the belief that females are the fore-bearers of fertility, continuity and familial succession in all species.

Nowadays, the Maasai lion hunt is usually done in groups in order to ensure that the lion population has a chance to continue and flourish. The warrior who spears the lion and kills it has the distinct pleasure of being awarded the mane, tail and the claws of the lion. The mane of the lion is worn by the warrior as a mark of his immense strength, which he earned through his feat. Admit it, a lions mane is a much better trophy than having a girl dance with you at the prom.

There are always times in every individual’s life when they ask themselves the simple and most quintessential question that a person can ask in life, “What am I here for?”. The question in itself may seem to be pretty obvious and mundane, but the answer to it has deluded people for centuries. There are several hundreds and thousands of people in today’s world who have accustomed themselves to some form of corporate slaver or servitude and have never been able to understand their true purpose in life.

The Native Americans have a great way to pursue the answer to this question and gain the much-needed clarity in life that we “urbaners” are forever deluded from. This rite of initiation, where a young one seeks direction and a position in life is known as the Vision Quest. The way in which this quest for the vision of clarity is undertaken varies highly, owing to the large diversity in the clans of Native Americans. On the other hand, the basic aspects behind the quest remain the same. Young individuals, especially during their transformative years from teenage to adulthood, are sent into the arms of nature to catch a sight of the eternal connection that each one of us has with the spirit world. This basically involves the person initiating a quest into the wilderness, where he/she undertakes a fast for up to five days in order to somehow reach the inner recesses of their soul and gain clarity on what direction to take once adulthood flows over the child in him/her.

Tripped Out Fact: In some Native American clans, the Vision Quest is undertaken with the help of hallucinogenic plants in order to conjure up visions which are then interpreted by the medicine man in the village of the “Quester”. These visions can be seen even by us “urbaners”, if only we had the same respect for nature and psychedelic plants that the Native Americans have.

These visions are usually rich with signs and symbols which point to various important steps that the individual will have to take in his/her future lives. By fasting and being one with nature, the young individuals leave behind all past attachments as well as bodily attributes, with only the spirit sustaining them. It is this state of spiritual connection that is required for clarity and direction in life.

Cultures all over the world stress the importance of being alone with nature during the transformative years of one’s life, especially when a child transforms into an adult. In modern society, this transformation is not considered important at all, with lesser and lesser importance being attributed to nature as the most complete teacher. Moreover, modern society does not recognize the need for solitude during this phase of transformation, in order to ensure proper introspection and reflection. The Aborigines of Australia recognized nature as the best teacher, and also attributed high importance to the elements of introspection and reflection. The rite of passage which they followed in order to harbor their respect to nature and the transformation of a child to an adult was the walkabout. In this ceremony, an Aboriginal teenager is sent into the wilderness alone for a period of six months in order to learn basic survival and to ensure that he learns as much as possible about himself during this period of intense introspection and self-reflection.

Tripped Out Fact: The Aborigines follow “song lines” left by ancestors to guide them on their survival journey during the walkabout. The song lines are basically patterns of clouds in the sky, the stars as well as the position of the Sun and the Moon, which the Aborigines recognized and revered as life-sustaining symbols themselves.

The walkabout is seen as more than just a ceremony for the transformation of a child into an adult. It is seen as an opportunity for the individual to focus on the spiritual connection that is harbored deep within him, beneath all the layers of judgment, perceptions and naïve fantasies that he may have garnered during his childhood years. The intense time of introspection and reflection on past mistakes and future direction is an essential part of “growing up” for an Aboriginal individual. In this rite of initiation, the individual looks to nature to provide him with all the necessary answers to his dilemmas, including basic survival, responsibilities, as well as spiritual connection.

One of the most important part of the transition into manhood is the cleansing of the body and the mind of all past influences, judgments and perceptions, in turn opening up to a completely new set of beliefs, perspectives and outlook towards life itself. This essentially involves letting go of childish desires and fantasies, giving space for essential elements of courage, responsibility and dexterity to thrive within the mind. The Matausa tribe, who reside in the far reaches of the jungles of Papua New Guinea understand the importance of cleansing the body and the mind of all past influences, hence practicing a brutal initiation rite. The name of the ritual barely starts to scratch the surface of the brutal and intense nature that it embodies.

The ritual basically involves a few essential practices related to the cleansing of the individual in order to rid him of all impurities of childhood. The first step involves pushing of long reeds down the mouth of the individual into the stomach, until the gag reflex forces the vomiting of all the internal contents. Next, sharp reeds are forced into the nostrils of the individual until mucus and blood starts flowing freely. This is to rid the individual of all the contaminants that he may have breathed in. The last ritual involves the practice of bloodletting through the tongue, as the tender flesh is repeatedly punctured with the help of a sharp arrow.

Tripped Out Fact: The basic belief behind the ritual of bloodletting is the purification of the male’s body in order to rid him of the “feminine” blood of his mother, which the Matausa (and many other tribes) regard as a necessary practice to ensure complete attainment of manhood.

There are no ends to the importance that various cultures around the world attribute to letting go of childhood memories and traits in order to make way for the birth of a new phase of adulthood. The Algonquin Indians of the Canadian regions use this aspect as an important way to transition into adulthood. The way in which this ritual is practiced is through the use of an extremely powerful psychedelic plant mixture known as Wysoccan. The young boys who undergo this rite of initiation are first led into a secluded cage in complete solitude and are administered high dosages of the plant extract. The side effects of the plant include heavy memory loss, along with several other side effects such as loss of speech, extreme hallucinations and delusions, extreme fatigue, heart palpitations and loss of motor control. The boys are left in this state of extreme delusions and hallucinatory “insanity” for a period of 14 to 20 days on an average.

Tripped Out Fact: Wysoccan is a potent mixture derived from Jimson Weed, also known as Datura Stramonium. This is a very potent plant, the poisoning of which has been attributed to lethal circumstances.

Tripped Out Fact: Datura also contains a chemical called Scopolamine, which has been attributed to the aspect of dissolution of free-will in the user, meaning that the person is now prone to suggestion by anyone he/she encounters during the trip.

The Algonquin Indian trip continues for its stipulated period after which the boys are examined by the medicine man. If there are still traces of childhood memories still left in the individual, he is subjected to another grueling ritual or “trip”, until he is rid of all his past memories and childhood fantasies.

Check out the brutal blood initiation ceremony performed by the Matausa

Check out the details of Datura/Wysoccan

Previous Travel Week Recap: 7 insights carry with us for the road ahead
Next Niyoga Dharma and the Status of Women 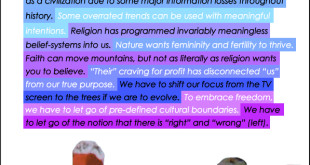 Culture Week Recap: 12 things we learnt from an exploration of ourselves

1. A civilization has the power to thrive as well as annihilate itself As we …