This is article #7 – part of deep trip series on Sanskrit.

This is also article #3 – part of deep trip series on ‘Loss of Cultural Knowledge’. You can read part 1 here & part 2 here

Not many people relate the decline of Sanskrit with the fall of Nalanda, but it surely is imperative. The turn of 12th century saw the first Mughal invasion in the then Greater India.

Bakhtiyar Khilji, a maniac Turkic chieftain, destroyed the complete knowledge repository of the Sanskrit literature, Nalanda University, unknowingly! What an absurd end to the great storehouse of scientific & philosophical knowledge! He mistook the great university for the fort of the kingdom.

The attack was not focused on the university, but on the 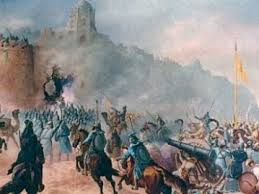 kingdom & the religion. Khilji supposedly beheaded all the Buddhist Brahmans after burning down the university. It was only after the whole place was burnt did he realize that this massive place & the fortress was not a city, but just a college. In fact, a complete city that was transformed into a University, a Mahavihara, derived from the Hindi word for college, Vihara (Bihar).

Buddha & Mahavira both are said to have visited the village of Nalanda in 6th & 5th centuries BCE. Other notable thinkers & scientists who were associated with Nalanda include:

Aryabhata – who pioneered the concept of ‘Zero’ & approximation of ‘Pi’

Nagarjuna – who pioneered the ‘relativity’ school of thought

After its fall, the great University was forgotten till 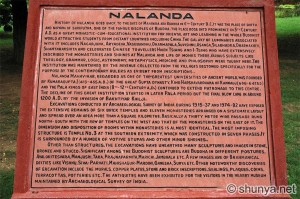 the 19th century when the remains came in the notice of a Scottish geographer. Post that, two rounds of excavation & restoration were conducted in the late 20th century.

At its peak, Nalanda was a house to over 10,000 scholars from around the world and over 2000 teachers. The education at the university was completely free but the admission process was very stringent. The etymology of the word Nalanda comes from a combination of three Sanskrit words, ‘Na + Alam + Da’ meaning ‘no stopping to the gift of knowledge’. Knowledge was the only resource that was respected & appreciated here. But it had to fall in the hands of religious fanatics.

Not only the decline of Sanskrit, this incident also witnessed the decline of Buddhism from India. Buddhist scholars were brutally murdered by the ravaging armies of the attacking Mughals & the rest of them apparently fled to Tibet & China.

There is no systematic historical account of the damage & loss of this event. However, it is estimated that books were burnt in millions & scholars were killed in thousands.

Dr. Ravindra Pant, in an interview to The Hindu said, “Today we know only 10% of Nalanda. We have to find the remaining 90% of the campus. We have to properly map it to rebuild. Right now these mounds are like a jigsaw puzzle.” Just this 10% of excavation has revealed eleven monasteries & six major brick temples, learning centers. Just imagine how big the destroyed knowledge hub actually was! And then imagine the kind of loss the world would have suffered by an act this gruesome!

Manuscripts were burnt & lost in millions as per different 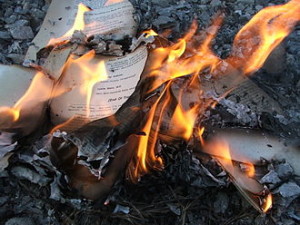 The fall of the University of Nalanda came along with a very long Islamic rule in vast parts of India. This went on for a few centuries until the beginning of a new era- British rule in the 18th century. Due to lack of political support to the language, the long standing rule of Sanskrit as the link language did not survive post the destruction of Nalanda. It is still revered & respected but only as a liturgical language more or less. A lot of valuable scriptures have not even been translated for common people to understand. However, countries like Germany & US have started taking interest in digging the lost knowledge by translating & teaching scholarly Sanskrit research books from the past.

With Nalanda, there were more casualties. Sanskrit literature perished and so did Sanskrit as a language. And more importantly died the proof of whatever had been achieved till then in the great sub-continent in terms of Science, knowledge, wisdom & art.

Previous Loss of Cultural Knowledge #2: Library destroyed, Scientist murdered in the name of religion!
Next The Birth of Mathematics: The Language of the Cosmos