Fact#1 You dream several times in a night, in intervals: 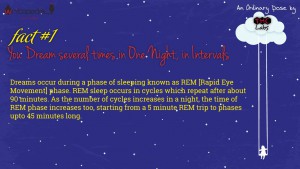 Dreams occur during a phase of sleeping known as REM (Rapid Eye Movement) phase. REM sleep occurs in cycles which repeat after about 90 minutes. As the number of cycles increase in a night, the time of the REM phase increases too, starting from a 5 minute REM trip to phases up to 45 minutes long.

Fact#2 Your body is paralyzed during REM sleep:

During the REM phase, your body shuts down certain neurotransmitters in your body due to which complete paralysis occurs. This is a defense mechanism to ensure that you do not act out your dreams in real life. Absence of REM sleep paralysis results in disorders such as sleepwalking, where people actually live out their dreams.

Fact#3 Your ability to read time disappears in your dreams:

In your dreams, your inherent ability to read time becomes non-existent. In generally, it is impossible to read anything in your dreams. Numbers on clocks as well as any kind of writing appears completely jumbled and in most cases, doesnt make any sense.

Fact#4 The people you see in your dreams only consist of people you’ve met or seen in real life:

The human brain does not possess the ability make up new faces and characters on its own. Due to this, all the people you see in your dreams generally consist of people that you have made acquaintance with in real life or just come across during some point in your life. This means that when you don’t recognize someone in your dream, it may be someone from your childhood whom you have forgotten about.

Fact#5 A dream always signifies something completely different from what you see in it:

The language of dreams is completely based on symbolism and hence, cannot be interpreted by trying to understand the literal chain of events that occur in it. Dreams often represent interpretations of various features of your personality which the subconscious mind strives to portray.

Fact#6 External stimuli have  huge impact on your dreams:

External stimuli, such as noises, smells and taste, can have an immense effect on your dreams. Other than these, physical sensations such as thirst and heat can also manifest themselves in your dreams and play a huge role in them.

Fact#7 Even blind people have dreams:

People who have been blinded during the course of their lives actually “see” visual images in their dreams. On the other hand, people who are blind from birth have dreams which incorporate their other senses, such touch, taste, smell and sound.

Fact#8 You can actually control your dreams:

Sometimes in your dreamscape, you actually become aware that you are dreaming. If you resist the urge to wake, you successfuly become lucid. This means that you in fact gained conciousness inside your dream and can now manipulate it according to your whim and fancy. This is known as lucid dreaming.. .

How to Interpret Dreams by Anna Fornari (Crescent Books, 1989) {An excellent book for those trippers who want to understand recurring symbols in their dreams}

Previous I Was Alive Too!
Next Mirror Neurons & Musicians

To life and its simplicity

Many feelings, Many thoughts Some fleeting, some lasting! Learning to tell them apart. The …