End of the Rafa-Federer era?

Rafael Nadal currently ranked 10th in the world has hit rock bottom again. The 14 times grand slam open champion was defeated last by Dustin Brown in the all England club. This was the 4th time that he has been defeated by a player ranked below 100 in the All England’s club. Rafael has been an inspiration to many who have taken up the sport and is still one of the best players in the world but for the past 18 months he has not been in the reckoning to win anything big. His next match is in the Rogers cup against Youzhny and it is not going to be easy against the tall Russian. But he won his last game in straight sets and scored some incredible winners off the base line.

2015 has possibly been the worst year for Rafa. The year started with a defeat in the quarter finals of Australian open and a rather more shocking defeat at the French open where Novak thrashed Rafa in the quarters. That match somehow made me believe that Nadal’s reign has come to an end. If he doesn’t win the US Open( which I am very sure he won’t ), it will be the first no slam year for Rafa. He is the only player ever to win a Grand Slam or more for 10 consecutive years; the only player in the open era to win 3 consecutive Grand Slams on 3 different surfaces; the youngest player in the open era to win all Grand Slams at the age of 24; and has appeared in the finals of each Grand Slam event at least 3 times. But is the real Nadal around? 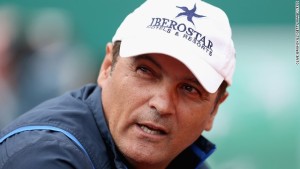 Who is to blame for his career low? The first casualty that comes to mind is uncle Toni Nadal his coach. Toni Nadal has been with Rafa since the start and no doubt Toni plays the most vital hand in Rafa’s booming career. Coming to French open at the age of 19 and winning it wouldn’t have been possible for young Rafa without the help of Toni. But it feels like a change in the coach could result into a positive outcome for Rafa.

He needs someone who can rub off the edges and make his game smooth. The amount of physical strain that he endures in court, and the hours that he needs to put in training for doing that, has taken a toll on him. But  not this year, this year he is hit with lack of confidence. Clearly his form isn’t helping anything.

Rafa has already stated that he never intends to change his coach. Two weeks back Rafa captured his third title of 2015 in Hamburg (clay). There were times when Foggini lost his cool but he kept fighting and in the end it turned out to be a well fought victory for Nadal. There were 4 breaks of serve in the second set! I am sure you can guess how interesting the game was.

Well in the start of 2014 Roger Federer geared up with Stefen Edberg. Edberg, one of the best sever and volley players of the open era has certainly helped Roger back to his offensive game and has been approaching the net more often. Though his last Grand slam was in Wimbledon (2012), as of now he looks the better of the two to get to a grand slam. The final of this years Wimbledon was keenly contested until the 4th set where Novak ran away with the match. But there was a sense of purpose about his game and he was eager to move in to the net and take a hold of the game.

The rivalry between Federer and Nadal was so intense that it was a centre-piece of attraction for a lot of people who used to watch the sport. It is something like the world losing both Ronaldo and Messi. With power play coming to the fray and becoming the most important part of men’s tennis, the bar has been set higher than ever for these stalwarts to come to the fore front and get back what they have lost.

Now as we gear up for the hard courts of US open ( not the most ideal place to counter power play), only time can tell if either of them will find form to come up with something spectacular at Flushing Meadows. But this year, it feels like most of the top 10 players are in form and playing really good tennis and thus we might have an amazing last grand slam of the year. But then there is Novak-the man who wins everything! Except obviously, the French open. But other than that he is absolutely unstoppable. I am certain that Djokovic will stand in the way of anyone who poses a threat to his title defense.

Previous Independence Day Special: Are We Really Free?
Next Questionable sports – how ‘sporty’ are they truly?