While the larger section of Bollywood still delves into formulaic 100-crore movie recipes and all the biggest stars domineering over the oh-so-rare realistic cinema with an almost dictatorial flare, the independent regional movies in India have effectively taken over the reins of a much needed cinematic renaissance.  Or at least it feels so with Marathi movies like ‘Sairat’ & Gujarati movies like ‘Kevi Rite Jaish’ laying the foreground for a regional-cinema led revival.

Last few days, I saw my friends from the regional film-making fraternity going rave about this new Marathi movie called ‘Sairat’. Especially the status of a friend, Mikhil Musale, who just finished shooting his first Gujarati feature film, motivated me to not give ‘Sairat’ a miss!

Staying in Dubai, there was hardly something I could do about it though other than waiting for some film festival which would screen it. Today morning as I woke up, I started browsing the Vox Cinemas website to check if “Waiting” had released in Dubai. I wasn’t shocked to find out that it had unfortunately met the same fate as ‘Neel Battey Sannata’, ‘Masaan’ and many other small budget Bollywood movies that do not see the light of a theatrical release in UAE.

However, the website visit paid off with an unexpected reward. The theaters in Dubai were showing ‘Sairat’! Ecstatic by this discovery, I jumped out of the bed at once, called up my Marathi roommate who was still in office and planned for a late night 12 to 3 show. 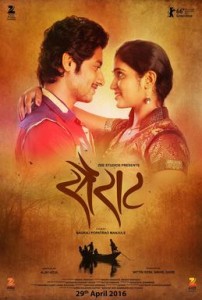 Alien to the Marathi language, I searched online & took relief in a news article that claimed that the movie had released with English subtitles for UAE. Now as the movie started, disappointment destroyed the excitement as I could see only Arabic subtitles on the big screen. The whole experience started as if I was watching a foreign language movie and I started pondering on whether I should walk off to watch it some other time with English subtitles. However, I thought I’d hang in for a few minutes and give the movie a chance to see if it is able to submerge me in the experience, given the language barrier.  Well, now I can say that this decision more than just made my night. Or maybe my year as this turned out to be my best cinematic experience of 2016 till now.

Twenty minutes into the movie, I felt deeply captivated by the lead characters – Parshya, Archie, Langdya and Sallya. This was a first time experience for me to watch a movie in an unknown language without subtitles and there surely were some quirky one-liner jokes that set the people around me cracking & jostling in spells & bouts of laughter while I kept elbowing my Marathi friend to translate to me what just happened! Despite of missing out on those epigrams, I soon discovered that the essence of the story was intact and not much was lost in translation (or interpretation) for me!

The first half of the film took me on a rollercoaster ride of emotions that any good love story takes you through. The only major differentiating point for this film was a ‘Masaan’-like freshness in the love story. However, there came a transition point a few minutes before the interval that suddenly changed the path the movie would take in the second half. I felt the tipping point of this transition when all the four lead characters sail off on the boat of fate – neatly handled by the director. It was at this point I let out the first gasp expecting a hard hitting second half.

The second half, however, did not levy its expected hardness on me straight away. Now that I think of it, I can say that a less mature director would have surely fallen for that trap of sensationalizing the buildup that had culminated into the interval. Nagraj Manjule, however, thought of delving into the delicate nuances & shades of the life of lovers who are on the run. Throughout the second half, I knew that there was a wheezing moment approaching soon that might bring it all crumpling down. And I still cannot come to terms with the superlative tactfulness shown by the director in concealing that very moment with such finesse. Love was established & played around with the innocence & rawness in the first half. The second half was more dedicated to what happens after love. Just loving someone is not enough, right?

Tripped Out Fact: In less than a month of its release, Sairat is already the highest grossing Marathi movie ever. It has already grossed 80 crores* even before its release outside India; the happy producer has paid 5 crore in bonus to both the lead actors. In UAE, this is the first time that a Marathi movie has seen a theatrical release. Mind you, I was longing with the same intensity for ‘Natasamrat’ to release here earlier this year. But even a one-off show has not happened of the movie which has heavy names like Nana Patekar as the lead actor & Mahesh Manjrekar as the director.

The village environment is so realistic and the music is enchanting even for someone who doesn’t understand the lyrics. Especially the songs, ‘Sairat Zaala ji’ and ‘Jhingat’ that are still echoing in my head. You should treat yourself with these songs right away, here are the links:

‘Jhingat’ happened to be my first song in a Dubai theatre where I saw young Marathi lads from the audience stand up & erupt into a wild little dance huddle just beneath the screen as a live performance. Such was the music and later I learnt from my Marathi friend that such was the power of the lyrics used in the song.

Returning home at 4 am, still delving in the magnetic field of the shockwave surrounding me, I started reading about the movie, actors & director listening to the above two songs in the background in repeat mode, refusing myself to get rid of the hypnotic feel by sleeping it off. And it was then that I discovered a trivia about the female protagonist, Rinku Rajguru, that she is but a 15-year-old 9th grader. And I succumbed to recollect all the spellbinding moments she offered on screen with such a charming & ripe stronghold on the chirpiness, masculine rawness & the profusely diverse shades of emotions that were required of her character. A 15-year old who drives a Bullet & a tractor with such flare, whoa! 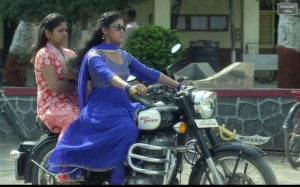 The male lead, Akash Thosar sparkled throughout in his portrayal of an innocent teenager turned into a brave lover. The standout performer was Langdya, played by Tanaji Galgunde, who won my heart for his villager’s rawness.

The cinematography with all its sophisticated grace was delightful to the eye. But the knock-out punch was delivered by the climax. It felt to me as if in all its slowness of the second half, the director was just greasing your heart with enough warmth so that you could deal (or probably render yourself unfit to deal) with the eerie silence that sweeps your feet off the ground just when the warmth has made you comfortable. That final fatal blow is the director’s moment in the movie! The music stopped and all I could hear was the heavy gasps of breath (almost panting) from people around me. I saw spooked & unnerved faces around as I walked out of the theater with a heavy heart. Man! Such intensity, Never before!

Nagraj Manjule, I salute you for the rich experience and for avoiding every hackneyed cliché that a director could fall for. I already am yearning for a second watch (this time with English subtitles :D).

Previous Find Mr. Right or Your Dream Girl Through Dating in the Virtual World
Next Apodyopsis: The Writer’s Naked Soul