Destroying or Deciphering the Music of the Whales?

Since the evolution of organized sound, its main purpose has been to gather, store, convey & process some information encoded in the beats & words. But what if I tell you there’s a certain species that writes songs as elaborate as the books that we humans write?

Tripped out Fact: If we imagine the songs of the whales in tonal length, then the information in one song is the same as the bits of information embedded in “The Iliad” or “The Odyssey” – Carl Sagan

Check this video below to understand how these whales cognize & respond to Music:

There is evidence that the grandest of the songs was not written or composed by one of your favorite bands, not even by humans for that matter. Whales are & have always been the masters of sound, music & song composition.

These intelligent & elegant masters of the seas are by far the grandest beings on the planet. In the world of water, where the senses of sight & smell are of not much use, they have evolved an extraordinary communication system using the sound waves which travel more than four times faster in water.

The American biologist Roger Payne discovered the existence of a deep sound channel in the ocean & calculated that a whale can communicate with another whale essentially anywhere in the world. Imagine! What we can do using our telephone sets, whales can do that naturally. The humpback whales also seem to have established a global communication system.

A lot is unknown about the sounds that the whales make. But they certainly seem to have systematic rhythmic patterns backed by a prodigious memory power. They use sounds to tickle the memory organs in their brains as we use language mostly. Echolocation is believed to be the primary motive of these whale sounds. They use them to navigate freely, to hunt for preys & to foresee any upcoming dangers.

Tripped out Fact: Certain times, the whales will enter the water in the middle of a song, navigate away, come back to the spot after some months & begin the song again exactly where they left it from. Beat for beat! What a memory!

Whales also seem to engage in collaborative song writing, a group would sing the same song; everyone would pitch in with some improvisation & eventually come up with a master-piece! Their complex songs range in the frequencies of 20-9000 Hertz, some of which is undecipherable for human ears & some could just blow our ears apart! Some of the rhythmic patterns are clearly artistic elements beyond just simple form of communication or information. Check the video below on headphones, pay attention the musical notes for the beginning how consistent they are, close your eyes later for a while & enjoy the echoing or reverberating sound in your ears:

Well, I am totally convinced that life in the process of evolving without any serious threats of predators is surely to produce masterpiece art.

In fact, Katy Payne, the wife of aforementioned Roger Payne, collected different samples of whale songs over consecutive years & found interesting evolution of the same song over years. The picture below summarizes her research in sonograms & incremental artistic patterns in the evolution of whale songs: 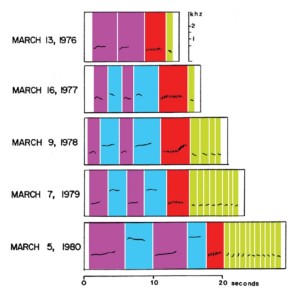 We do not yet understand what kind of information they are transmitting through the songs but one thing is certain that they have a dazzling sagacity for poetry. Probably they are love songs or call outs for their loved ones.

However, on the other side, with the advance of deep ocean exploring, military ships, naval wars & other human absurdities, we have surely managed to cut off the communications channel of the whales, silencing them & reducing the reach of their sound waves. Imagine if some other intelligent beings someday cut off our telephonic & internet communication network system! In fact, we have done worse by our vested interests in whale trafficking. We murder & slaughter them in the name of science & for the ugly business of whale meat! As per a research, we continue killing around 16,000 whales per year.

“We use the word monster to describe animals who are somehow different from us, somehow scary! But who’s the more monstrous? The whales who ask only to be left alone in their rich & plaintiff songs or the humans who set out to hunt them & destroy the and have brought many whale species close to an edge of extinction!” – Carl Sagan

The game of the nature is & always has been of synergy! Establishing supremacy over nature is not the way out. Mysterious creatures are to be understood, that is what the purpose of Science should be. We should try to establish, if nothing, a musical harmony with these amiable creatures who just give in to music as you saw in the first video above. And these creatures are undoubtedly unthreatening & technologically innocent!

If only we could understand the harmony of music! What if we rather aim to accentuate our music producing skills by collaboration with these musical geniuses?

Why Whale Songs Are Still One Of Science’s Greatest Mysteries. (Dvorsky & Gadye). http://io9.com/why-whale-songs-are-still-one-of-sciences-greatest-myst-1692174859

Previous Are we music…?
Next Rise of the Machines