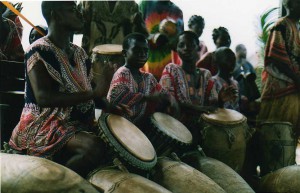 ss and oneness among the members of a community. In actuality, music is one of those elements that can be used as an external stimulus for aiding the journey into the higher realms of consciousness. This is why numerous cultures and communities all over the world use music in their ceremonies and ritualistic practices, as a sort of vehicle for them to transcend into other dimensions of consciousness, or to interact with spirits and inter-dimensional beings. Moreover, the term “set and setting” can also be used in the case of utilization of music for purposes related to rituals, ceremonies, attainment of altered states of consciousness, and so on.

Music has a huge role to play in the Shrine ceremonies of the Ashanti people of Ghana, Africa. The Ashanti people have a very deep level of respect for their music, so much that they associate it with some of the most important religious practices and healing rituals that they are known for. To understand how music plays an integral role in their ceremonies, it is necessary to understand their basic religious ideologies. The Ashanti people believe in a supreme god, namely Onyame, who is said to have cut off all ties with humans and the materialistic world. Other than Onyame, there exists a lower level of gods known as the obosom. These gods are said to talk to humans through the means of the physical presence of a human medium or spiritual healer, known as the okomfo. The “shrine” in an Ashanti Shrine ceremony refers to the shrine that is built for the obosom. It is here that the gods communicate with the people through the okomfo. The shrine music, which predominantly consists of percussion instruments known as the “talking drums”, is essentially required for the completion of the ceremony as a whole.

The talking drums of Ashanti are known as the atumpan. These usually consist of a pair of drums, one with a low bassy tone and the other with a high tone. The patterns played on these drums are usually steady and long, with little or no phrasing or regularity in terms of notes and song parts. This in turn forms a kind of “percussive” language, which can clearly be understood by most of the elders among the Ashanti people, for whom it is like any other language. The drums are hence, used for numerous purposes, from recreational purposes related to communal gathering and dance, to actually communicate between people and musicians in normal day life or during performance. During the shrine ceremony, the atumpan are used to announce to the people that the shrine ceremony has started, inviting them to the shrine to be a part of the ceremony and bring their troubles in front of the okomfo. Moreover, the atumpan are also used to call the obosom and to allow the smooth transcending of the obosom into the body of the okomfo.

Tripped Out Fact: Depending on which obosom is trying to transcend into the okomfo’s body, the musical patterns and rhythms may be changed, in accordance to the “preferences” of that particular god.

Ayahuasca has been described as one of the most powerful plant medicines, speculated to contain the power to rid subjects of harrowing addictions, and maybe, even save them from diseases such as cancer. Ayahuasca, is a tea brewed from a combination of leaves from the Chacruna plant, and the vines from a plant called Banisteriopsis Caapi. The concoction contains one of the most powerful psychedelic substances known to man, namely DMT or Dimethyl tryptamine. The powerful effects of this medicinal tea is said to have very high degrees of intensity, accompanied by visions and powerful realizations. The medicine is said to have a huge impact on the overall connectivity of neurons in the neo-cortex, resulting in disintegration of older connections as well as the formation of new connections. The raw power of ayahuasca can only be channeled through the conduction of proper ceremonies, which are especially conducted in places like Iquitos, Peru. Among the most important aspects of these ceremonies are the Icaros, which are ritualistic chants sung by the shamans during the initiation as well as the continuation of the practice.

Icaros are special chants sung by the shamans during ayahuasca ceremonies, which are said to have been recited to them by the spirits of the plans themselves. Most of these Icaros are said to have appeared to a shaman when he/she is exploring the visions and dreamscapes induced by ayahuasca itself. Each Icaro is used to initiate different types of effects on the patient as a whole, the examples of which include “Manchari” (songs meant to lead an abducted soul to its rightful abode), “Shirohuehua” (used for inducing hope and joy in the patient), and “Icaro de aranita” (used to spin a web of harmony between a man and a woman so that they are bound together for eternity). The Icaros vary from each other in terms of the intensity and range of emotions that they are associated with.

Tripped Out Fact: The Icaros are also used to alter the intensity and direction of visions that a patient perceives. In accordance with this aspect, varying Icaros may be used in a single ceremony, depending on the patients as well as the aim of the ceremony.

The Candomblé religion, prominent in Brazil, also incorporates music into its ceremonies and rituals, which are based on supernatural and theistic implications. The practitioners of this religion believe that the music used in these ceremonies, which is heavily structured by percussive rhythm patterns. The music is considered to be an essential part of any religious ceremony, due to the belief that it acts as a vehicle on which the gods (known as orixas) descend onto the earthly realm. The gods are then believed to “possess” the dancers, who are drawn into a trance state of constant syncopated dance movements. There are three basic percussion instruments that are responsible for carrying the complex patterns of these songs. The instruments include the three drums called rum, le and rumpi. The rum is the largest drum, which is accompanied by the smaller rumpi and le. Along with these drums, other instruments such as the xequere (a gourd adorned with strung beads) and agogo (a set of bells) are also used, especially to set the tempo and the basic pattern of the song.

In the ceremonies involving these songs, the drummers are not in the trance and are in constant communication (of the musical type) with the dancers as well as the ceremonial priests, changing and molding the rhythm patterns in order to channel the intensity of the experience that the dancers are having.  The instruments are believed to possess sacred power invested in them by the gods, making them an essential part of the ceremony as a whole.

Tripped Out Fact: Not unlike the Ashanti people, the practitioners of Candomblé believe that the gods also have their own preferred rhythm or song, which in turn also portrays the main forte of that god or orixa. For example, one of their gods, known as Oshala is supposed to be old and slow, owing to which the rhythm used for ceremonies related to Oshala is also a slow, droning rhythm.

Tripped Out Fact: The art of making the drums themselves is a very sacred and purely revered practice. The art requires a trained specialist to execute it to perfection. Moreover, the process is only deemed complete when an animal, usually a chicken, has been sacrificed as an offering to the gods and its blood has been poured over the drum skins.

Iboga is a psychedelic root, which contains a tripped-out chemical known as Ibogaine. It is used in a ritualistic way by the pygmy tribes of Central Africa (especially in places like Gabon) for healing ceremonies, which are powerful enough to cure heroin addictions in one sitting itself. An iboga ceremony generally consists of an incomprehensibly intense trip of up to 36 hours. Other than that, ritualistic practices revolving around the Iboga root have been known to cure all manner of serious psychosomatic and psychological disorders. Not unlike ayahuasca, Ibogaine also produces intense visions with the power to disintegrate the barriers of your perception and open it up to broader perspectives. As is the case with most ceremonies involving psychedelics, the music plays a crucial role in guiding and carrying the trips of the patients or “explorers” who have dared to undertake this journey into visionary.

The music in Iboga ceremonies is basically carried by the mouth bow and the Bwiti harp, whose melodies are accompanied by singing as well as tribal percussive instruments. The rhythm produced by the music acts as the very vehicle in which the explorer travels the visionary space inside him/her in order to look for answers from within the deepest reaches of our consciousness. The effects of the music on the explorer are heavily magnified when he/she moves to the music, causing an intense increase in perception of visions and subconscious dreamscapes.

Tripped Out Fact: The people who choose to explore the state of consciousness induced by Iboga are told to write down whatever questions they have in mind, so that they can ask them to the Iboga plant spirit and gain their answers by travelling deep into the visionary space of one’s consciousness. In most cases, the explorers who are hardy enough have gained more than just answers.

{Learn about the Candomble religion basics}

{The story of Iboga}

{More about Ashanti ceremonies and drumming}

{In-depth tripping on Iboga and music in its ceremonies}