The Extremes of Music (Part-1)

All types of music have the innate power to cause a deep impact on pretty much anyone who has the ability to perceive it. But then there are those few artists who have the power to literally churn the inside of your head into custard; to give you an experience out of which you will emerge with numerous changes in percep 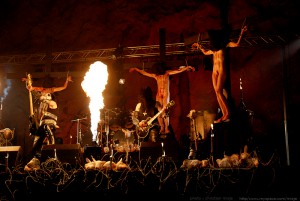 tion, through their music as well as their lives. This intense effect such artists have on us is usually because we are in utter awe over the colossal degree of dedication that they have towards their music and the principles that it represents. These artists have willingly and enthusiastically surrendered to their music, which gives them the edge to go to inconceivable lengths, beyond all boundaries and barriers, to portray their beliefs and principles. Get ready to have your head rewired as we bask in the glory of these unsung martyrs who have taken that extra step to extreme.

The name of this Dutch extreme metal/noise band, formed by the union of members from both black metal as well as ambient backgrounds, comes from the word “Stalag”, which was the name of a German concentration camp. The band actually lives up to its name as it inadvertently propagates the extermination of mankind as a whole. The very nature and purpose of their music has been said to be to fill the listeners with the most negative of emotions, such as despair and paranoia. But, these points are the least alarming of all their principles and antics. The most extreme aspect for this band is that they actually abducted mentally-ill patients from an asylum and used their screams as vocal patterns for their songs. Their songs usually consist of overwhelming sounds of pain and mournful pangs of mentally-ill patients, along with undecipherable walls of sound which are hardly indistinguishable as instrumental/electronic sound. Nonetheless, their songs succeed in whatever they were supposed to entice in the listeners, with each song of their album, “Project Misanthropia”, taking you further and further into the depths of despair and utter chaotic paranoia. The band eventually transformed into a new project known as “Gulaggh”, which is a play on the word “gulag”, implying the Russian prison and concentrations camps set up during Stalin’s reign. With this project, they went even further by incorporating the screams and howls of abused children and women, who ranged from mental patients to rape and abuse victims, along with layers of classical instruments. The core members of the band still continue to be anonymous, having played no live shows till date (and do not intend to do so).

Tripped Out Fact: One of the members of Stalaggh abducted the mental patients from an asylum where he used to work, under the pretense of giving them “primal scream therapy”. The band then took the patients to an abandoned chapel in a monastery where they recorded their screams. One of the members was almost killed in a scuffle with a patient with homicidal urges.

Tripped Out Fact: The “gh” at the end of both band names has been cited to stand for the words “global holocaust”, which if you ask, is creepy as well as ingenious. `

Tripped Out Fact: The patients selected for the vocals on their songs are not retards, according to the band members. These patients suffer from disorders such as borderline personality disorder, schizophrenia, bipolar disorder and so on. They are introduced to the bands ideologies before any session, to which many of them have started showing inclinations. According to the band, a few patients have said that working with them was one of the best kind of therapies that they have had till date.

This group of musicians merges the intensity of tribal drum patterns along with the psybient-drone feels in the background, resulting in channelized chaos that hits you right in the head. The group consists mainly of percussionists, along with guitarists, vocal modulations and keyboard generated synth patterns. But the aspect that truly makes them extreme is the fact that in their live shows the disparity between performer and audience vanishes, as everyone joins in for a tribal ritual where all of one’s inhibitions are shed. The members of the band smear the audience with substances like blood, whipped cream, small fireworks, strobe lights, smoke and what not. The members of the band entice the audience, who usually have small self-made instruments with them (or are provided with them), into a mass ritualistic gathering complete with fire, nudity and utter abandon. The energy that these live shows produce have the power to actually influence the way we see things in real life. The state of consciousness that people experience in their live shows has been described as being primal and liberating.

GG Allin and the Murder Junkies

One of the most well-known enigmas, when talking about extreme musicality is the infamous GG Allin. He has been known by a lot of things, including the self-proclaimed messiah of rock and roll who had sworn to bring back the true rebellious nature that the music inherently possesses. On the other hand, he was also known for being one of the pioneers of the genre of music known as “fecalcore”. If you study the word closely enough, you will see traces of shit on it (pun intended). This is mainly because his live shows mainly consisted of Allin writhing around in his own bodily fluids, which he generously threw at the audience too. His shows also consisted of him kicking and punching the audience, all while wearing the only clothes that he came into the world with (except for an occasional jockstrap).

Tripped Out Fact: GG Allin was born as Jesus Christ Allin, being fathered by a religious fanatic whose fantasies of his son being a messiah was passed down to Allin himself, who chose to view the same vision in a more rock and roll kind of way.

{Crazy “shit” in this video}

Mayhem can be counted amongst those bands which have been known more for their controversial antics rather than their music, which is actually meaningful as well as powerful to the willing ear. Mayhem and the controversies related to them include usual ones surrounding black metal artists, such as church burnings, to more sinister incidents like murder and its glorification. Most of their previous members have been associated with heinous crime. One of the craziest incidents occurred when the then-vocalist Per “Dead” Ohlin, shot himself in the head. The guitarist, Euronymous, who has seen his share of controversies, found Dead’s lifeless body in his house, with a suicide note and brains splattered all over the place. The first thing that Euronymous did was to fetch a camera and take a photograph of the dead body (Dead’s dead body). He also made himself a necklace out of the fragments of Dead’s skull. Another aspect that Dead-era Mayhem was known for was the frontman’s antics in live shows. Dead was obsessed with the fact that he had to transcend into another dimension or place, which could only be attained through death. He used to bury his stage clothes a few days prior to any gig, so that he could wear the rotting and soiled fabrics on stage. He also had a weakness for dead animals, which were a staple at their shows.

Tripped Out Fact: Mayhem shows were incomplete without severed pig-heads on spikes, along with Dead mutilating himself on stage and letting the blood drip onto the audience.

Tripped Out Fact: Dead always smelled dead animals, especially a dead crow which was among his favorites, before going on stage. The reason for this, as cited by Dead, was that he wanted to have the “stench of death” in his nostrils while performing.

There have been numerous male musicians who have gone the extra mile and showcased something that truly messes with mainstream outlook and perception. But, where females are concerned, there are only a rare few who have actually shed their inhibitions and gone extreme. One of the first names that comes into mind in this case is Rockbitch, the all-female goth-metal band which incorporated sexual acts and nudity along with paganistic rituals in their live shows. The band was created with the purpose of destigmatizing female sexuality and changing the dreaded and closed-minded outlook that society has on women sexuality and sex as a whole. Other than the band members, there are “stage sluts” too, whose responsibility it is to keep stimulating the band members as well as the audience. As the band’s bassist, Lisa “Babe” Wills says, the main aim of Rockbitch is to take female sexuality and shove it in the face of societal elements which are condoning it.

Tripped Out Fact: Out of the many raunchy rituals that the band incorporates into their live shows, one of them includes a part where a “golden condom” is thrown into the audience. Whoever gets the condom is invited backstage to have sex with the band members. In most cases, it was seen that it was men who refused the chance to do so.

{This video contains lot of female nudity, along with powerful women who have learnt to embrace their sexuality}

{The story of Mayhem, raw and powerful}

{Some of the craziest stuff black metal musicians have done}

{Home of the father of Fecalcore himself}

Previous Sadness is a blessing!
Next Slayer of my state!