Want an intelligent app that would just know what you want to do with your phone right now? Read on.

You send an email to your client about a trip to London and a robot inside your phone suggests you appropriate flights, car rentals & hotel bookings gathering & collating all relevant information it can find in all the apps you use on your phone. How tripped out would that be? 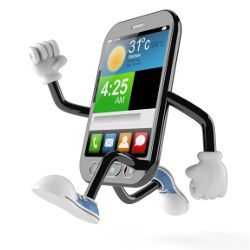 This app would not only search information relevant for you, it would create a whole database of information contained in all the apps you’ve downloaded & present to you the right information at the right time. If you have been talking to someone, the app will also figure out your relationship with the person & present relevant links/information by deep linking the context of the conversation.

Smartphones are considered smart till the time they are capable of catering to our ever growing needs for the technology to be versatile enough to make our lives easier. However, currently there lies only one single pain point which is that we need to juggle between several apps to find the consolidation & solidarity desired by us! We at all times try and replace the current application with its upgraded version or a new app which can replace 2-3 applications. This particular habit of ours has inspired the startup Weave.ai to build an intelligent alternative to ‘Google Now’. This particular AI infused app can pick up cues from the tweets for the relative context and fetch relevant information in other applications on your phone.

So the million dollar question, How would it make my life any better?

The phone is always useful if it can pick up the context & conduct searches based on the context of a query, which is wishful thinking, isn’t it? We have Siri – iPhones, OK Google – Android & Cortana – Windows but all these need you to give out certain instructions or specific queries need to be cited for it to utilize the data connection of your phone to search the web for the same.

For eg: You receive a message from a friend about this new movie that is running, so what you do is you exit the message & open either rotten tomatoes/IMDb for the reviews post which you try and make a booking from your app of Bookmyshow. So it is like jumping from one application to another. Weave.ai has come up with the idea of making it less of jump rope or a chore rather a smooth sailing task by accessing information already available on the handset itself taking into account what you are already doing with the Handset.

Weave.ai has built a demonstration of its technology by building an application to evaluate the contents of tweets and shoot the relevant information in other apps present on the phone, the idea is to have an auto search rather than opening a blank page & enter keywords. However, the applications are yet to be integrated for a live platform.

Google is not to be ignored on this avenue; they have developed a similar application & shared a preview in the annual developer conference, in May: It is an aid or assistant to the already existing Google Now & would be available for upcoming Android models. The application is known as ‘Now on Tap’, it works on the similar lines of contextual search which an automated process based on E-mails, Messages etc. (You can check it out here: “Google Rolls Out New Automated Helpers”).

However all of the above contextual search is still in the Trial & Error phase, let’s see if the giant launches it first or the other players in the market are able to create replicas much before the launch as in the rat race even if you have the beginners luck, staying the winner is certainly not easy as you need to survive the cut throat competition & growing need for a better option which would replace you in a jiffy if you don’t keep up in this ever-changing reality of the virtual world.

Previous Meet Pepper: The First Emotional Robot
Next The “Art” in Artificial Intelligence