Ban on Swear Words: The Overreaction that Could Ruin an Art Form

Ah, language; that lovely thing that we do with our mouths which can make the other person feel a wide range of emotions and feelings,  thus instilling the urge to reiterate and keep the conversation going. Language is as close to  an art form as dance or playing an instrument is. An individual has to carefully choose the words as well as the degrees of emphasis, pitch and volume in their words, in order to construct a sentence which can explain the exact context which one wants to convey to his/her counterpart in a conversation. Other than just the pitch, volume and emphasis in language, there are aspects like  syntax and semantics which resemble the inner meanings that each word has for the people in a conversation, which could vary vastly from person to person. So, you see, language is a pretty intricate mechanism and hence, needs to be dealt with in a delicate or an intense manner, depending on the inherent context that has been intended to be conveyed.

Sometimes, language may become quite ineffective in order to portray one’s deeper emotions or feelings, such as intense sadness or joy, ecstasy or crushing sorrow, or pulsating anger for the matter. This is when we need to shift into a paradigm of language where the semantics are left behind and the inner feeling is expressed through insults and swear words. For instance, when the immense urge of anger or a throbbing pain envelopes you, you would not just shout, “I am so angry because of all the crazy chemicals in my head!” You are more likely to yell out a certain expletive, because frankly, it helps. And of course, it is human nature to get angry and to repress these primal bursts of anger and sadness in everyday life by trying to be nice, even when you don’t have to be, is kind of messed up to be honest.

Tripped Out Fact: It has been scientifically proven that using swear words during times of immense pain or distress can actually have a calming effect on you. This is because swearing during these times of immense physical and mental stress can give you the extra boost that helps you keep going. So swear away people!

Let me tell you something which all you infantile and sensitive people need to learn. Each and every one of us, even the half-naked priest you saw at the temple, or a member of the Indian Censor Board, uses swear words! The only difference between us and these individuals who have the “holier than thou” attitude is that they think they are too civilized for using curse words while they would readily belt out a few if you slapped them right across the face. If you are a normal human being like me and do not consider yourself as a pure, ancient alien who has descended from the heavens to cure humanity of everything profane and obscene, you would know that swearing is an everyday part of reality in the world.

Let’s move on to films and the controversy which was sparked last year by some “high-born, bureaucratic wannabes” in the Censor Board Association of India (a group which should have been assassinated by now, but everyone seems to be busy with terrorists and all) when they came out with a list of words which they wanted to bleep and edit out of movies. They even stressed on the fact that they stand for only culturally and socially accepted language in movies, which the highly cultured “janta” of India can relate to and develop from. Wow, do you guys live with ear plugs all year around or are you just so brainwashed into puppets that you have no idea what the !@#$ you are saying! 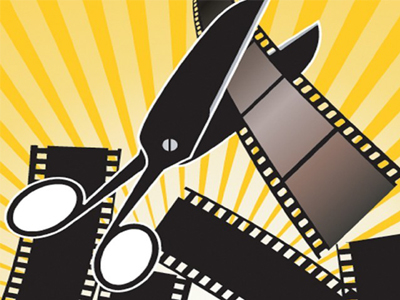 Some of the things that these individuals wanted included the move to remove a set of 28 words which they thought were not “socially and culturally acceptable” from movies, as well as removing all instances of violence toward women in movies, instances of violence in general from movies, and last but not the least, change the word “Bombay” to “Mumbai” so that the great netas in Maharashtra can sleep soundly like infants. What this would mean would be that every single movie would be like that last Sajid Khan movie you saw (or thankfully, did not see); overloaded with happiness, making no sense at all, and usually brainwashing you until you shit pieces of sugar!

My friends, by banning swear words and ensuring that movies portray only the bright, happy and culturally acceptable side of Indian society, the very essence of the art of filmmaking would be destroyed and flushed down the toilet. The essence of film-making, like any other form of art, is to get us as close to the truth of reality without freaking us out (sometimes even freaking us out)! Frankly, people, the truth is not as sweet as you think it is. Movies are instances where you have the chance to leave your everyday world behind and enter into the mind-space of a director as he takes you on a rollercoaster ride into the abysmal depths of his story, on a stream of utterly vivid and intense consciousness that will make you forget who you are for the quintessential two hours where you just let go. On the other hand, by restricting the creative expression of these filmmakers and putting limits on this visual experience, you are diluting the experience and hence, not giving the immense respect that the film as an art form deserves.

Well, this makes me wonder. Are these “holier than thou” characters denying the very freedom that filmmakers can avail through their films in order to explore some aspect of reality which they intensely and strongly feel about? How can you explore the immense violence, atrocities and the hard-hitting drama of everyday life without actually portraying the raw reality as it is? How can you educate an audience about violence, rape or domestic abuse without actually letting them experience the visceral details of the same? Are you saying we are all pussies who cannot handle this kind of experience and hence, need to be fed watered-down, colorful, sugar-coated bullshit made by dimwits like Sajid Khan?

Wake up, people or else get used to living in a world where going to the theaters would be like going to pray, completely useless! Good thing this one did not stick around for long or else we would have seen something just like that happen.

Here’s a list of the 28 banned words for you to laugh out loud. Tell us in comments whether you just got irked by our censor board or laughed your ass off or got offended. haha

Previous Ban on the AIB Roast: One for the Overgrown Elitist Babies
Next 7 inspiring movies ‘they’ don’t want you to see! Links to full movies in the article!