“Art should comfort the disturbed  and disturb the comfortable.”

A lot of artists these days attempt to push the limits and contort the very definitions of art. Picture this, you are an art critc in the early 70’s. You have decided to attend a performance art piece by a woman whose name you have had  heard a few time around the block.The performance starts as the artist enters the space fully clothed before undressing and wrapping herself in  a white sheet while atop a long table. The audience, which consists of mostly women, are  starting to get intrigued. The artist informs the audience that she will be reading from her book, ‘Cezanne, She was a Great Painter’. She then drops the sheet and while wearing an apron, applies dark paint onto her face and body. As she reads, she takes various  ‘action model poses’, typical of figure drawing clases.The members of the audience, who are  often seen contemplating the rights of women or the power of art outside the auditorium, glare  sharply at the performance piece. Finally, the artist removes the apron and begins to pull a small (folded) paper scroll from her vagina while reading out loud. Gasps from the last row and footsteps near the exit are heard. What is going through your mind at the moment if you are in the shoes of a critic? 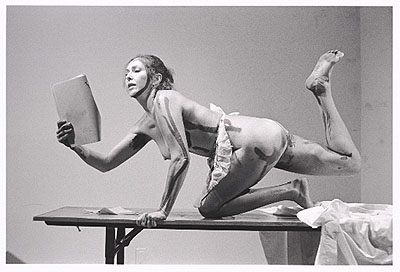 The artist was Carolee Schneemann. Her first performance, called “Interior Scroll”, occurred on August 29, 1975, at East Hampton, New York, in an art show titled Women Here and Now, honoring the United Nations’ International Women’s Year. The text of the scroll was taken from “Kitch’s Last Meal” (1973–76), the artist’s Super-8 film exploring an artist couple’s lives from the viewpoint of their cat.

This live perfomance piece instigated more than a few outrageous debates. Some of it dealt with what is art, what is its purpose and where do we draw the line? As we turn back the clocks to ancient Greece or India, we can observe how humans tend to draw a fixed border within which one could define the aesthetics of art, like the recordings of the Natyashashtra by Bharata or the Poetics  by Aristotle. Perhaps it is human nature to simplify the vast truths of aesthetics. People are strange when surrounded by strangeness. We tend to comfort ourselves by defending our threatened perception with familiar grounds, which often leads to hostile behaviour towards the strangeness. Art is the production of human creativity. The evolving human psyche of artists often attempts to broaden one’s horizons by visiting undiscovered islands of ideas. These ideas are often suppressed by the taboos of society due to a fear of anarchy that might disrupt the heirachy of society.

There are those who practised an art form  with the purpose of moulding the mind of an individual. A few weeks ago, a friend of mine explained to me that the meaning of psychedelia is rooted  with the alteration of the mind. Therefore, in a way, art is a psychedelic that might be a powerful source of influence for change in the societal structure. Works of literature, films, theater, painting and other art forms have been scrutinized in the past for the power they had held. Art forms have been a source of inspiration that has lead to historical movements that influence the present world we live in. We have witnessed the production of human creativity with an objective dedicated to direct human minds to address the concerned issue. But are there dimensions that structure this creativity?

“I thought of the vagina in many ways – physically, conceptually: as a sculptural form, an architectural referent, the source of sacred knowledge, ecstasy, birth passage, transformation. I saw the vagina as a translucent chamber of which the serpent was an outward model: enlivened by its passage from the visible to the invisible, a spiralled coil ringed with the shape of desire and generative mysteries, attributes of both female and male sexual powers. This source of ‘interior knowledge’ would be symbolized as the primary index unifying spirit and flesh … the source of conceptualising, of interacting with materials, of imagining the world and composing its images.” – Carolee Schneemann (More Than Meat Joy, pp.234-5)

Schneemann’s performance art addressed issues regarding the female form.  She was displeased by how the society around her viewed a woman’s body as taboo. She believed that this mindset resonated through the actions that lead to suppression of a woman in the hierarchy of a society. Though the female body was idealised and fetishized, fundamental aspects of the woman’s body were considered unclean. In order to produce an art form that would direct the individual’s mind to the  source of the problem, she had to create a performance that would break taboos. Once broken the structure of this taboo could be analysed more objectively. Thus, with a more objective understanding of the issue, necessary attention and action could be invested to find an appropriate solution.

But when art formulates itself in such bold and courageous structures, there usually arises certain problems while catering to large masses. There is a certain section of the crowd that would blatantly assume Schneemann’s art as pornography if they were not informed about its intentions. The advancement in the field of mass communication has created much scope for such miscommunications. The speed at which information travels in contradicting directions of  meaning on a continuum is something to awe at. 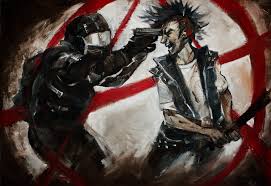 It is in this context that the rise of censorship has brought in a political dimension to the debate. Every country that is run by a few powerful men has an agenda to be protected. In the name of this agenda, the political influence derails the censor from time to time. In the process, the essence of originality of the art form is lost or even worse, subjugated to scrutiny.

To understand this process better, I suggest you pick up any piece of art, collect relevant critiques that provide contradicting interpretations and then personally attempt to root this critiques to its causes.

“Think for yourself. Question authority. Throughout human history, as our species has faced the frightening, terrorizing fact that we do not know who we are, or where we are going in this ocean of chaos, it has been the authorities, the political, the religious, the educational authorities who attempted to comfort us by giving us order, rules, regulations, informing, forming in our minds their view of reality. To think for yourself, you must question authority and learn how to put yourself in a state of vulnerable open-mindedness; chaotic, confused, vulnerability, to inform yourself.” – Timothy Leary

Previous Dante’s Inferno: The Art of Walking Through Hell
Next The Scream of Nature: The Monologue of a Painting