A Samosa for Bollywood & Britain

Have you created something so popular as to be yourself named after that creation?

This is precisely what Babubhai ‘Berawale’ did more than 100 years ago, as his grandson Mohammad 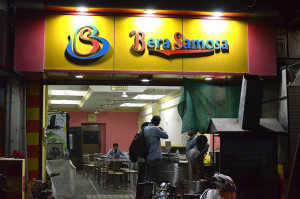 Bhai (Mohammad Saleem) told me. “He used to sell ‘bera’ samosas off a cart in Bhatiyar Gali, Ahmedabad before getting a small shop in 1928” adds Shah Nawaz Bhai, Mohammad Bhai’s son.

We were totally unprepared for such an unassuming establishment, named ‘Bera Samosa’, to have such a grand legacy, but then such is the nature of eateries in Bhatiyar Gali where legacy being served on a plate is an everyday affair.

Unsure as to whether the restaurateurs would be party to the idea of some food bloggers showing up at their door with great curiosity and appetite, we were tip toeing around a proper introduction, waiting for the ideal ice breaker. We started with some timid questions, focusing more on politeness and gauging the receptiveness of our soon to be hosts, when a regular customer (a strong patron in fact) thankfully decided to be the interlocutor and gave us a crash course of the questions that we should be asking.

“Ask them where all do they export their stuff..” he incited us. While we were busy coming to terms with the word ‘export’, Shah Nawaz started telling us about clients in ‘America, London and Dubai’.

“Ask them which celebrities regularly indulge in their samosas..” said our interlocutor, and the answer lived up to the hype as we were told that Bollywood icons like Zeenat Aman, Dilip Kumar and Salman Khan are among their elite clientele.

“Ask them how much meat is used by them daily..” we were directed again, but this time the gentleman could not help remarking “You are the ones supposed to be interviewing and I am asking all the questions” Sweet smiles of innocent acknowledgement on our faces were all we could conjure as a response, but the astounding answers kept flowing “We run through almost 1000 kilos of meat cumulatively on a daily basis” a nonchalant Shah Nawaz Bhai said, which does not include special orders for parties, marriages etc. Let’s just leave it at that.

By then, we had tuned into the place completely. We did not need to be polished, professional, suave food critics here. We came with some simple ideas and this family that has been creating art for more than a century, across 4 generations, were more than happy to tell their story.

The story is best told through the medium of their creations, the legendary ‘Bera Samosa’, the trademark ‘Dana Chicken’ and the wildly popular ‘Mutton Kebab’

1) Bera Samosa: This legend is made of minced mutton wrapped in a micro-t 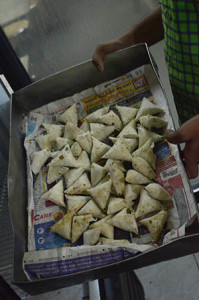 hin wheat flour strip shaped as a triangle. Chicken stuffed samosas are made only on order, not sold over the counter. We were served 100g by weight which came to about 5 samosas that were devoured in a matter of minutes. They hit the sweet spot of crunch and mush juxtaposition, with the ideal flavour burst in the mouth to follow. One pop and you’ll know why this became legendary.

Tripped out fact: Machines are not used for making the wheat flour strips for samosas despite the massive scale of production -the cooks make strips of 0.3 mm thickness by hand whereas machines are able to roll strips of 0.5 mm thickness which is not good enough!

2) Mutton Kebab: Kebab’s being so commonplace, it takes something special for a particular outlet todistinguish itself in this dish. Then of course, these were the ‘Berawalas’, and these uniquely delicious balls of succulent meat, marinated in a beautiful blend of spices and deep fried skilfully left behind a lasting impression on our taste buds. 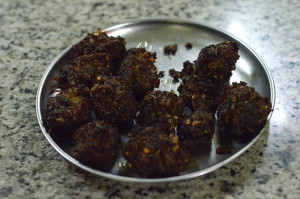 3) Dana Chicken: This dish has it’s own romantic story.

“It was created as a dedication to (and named after) Dana, the granddaughter of a friend of the founder Babubhai Berawale, in 1999” explained Ashraf Bhai, another family member who joined us at the table. This is another signature dish, which has been replicated by many across Ahmedabad, except for the secret ingredient which sets the original Berawala Dana Chicken apart. Minced chicken, delectable marination and expert frying as usual. Let me not be more cruel to you. 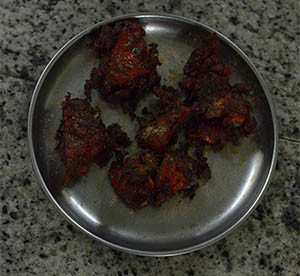 Bera’s legacy is prevalent in Bhatiyar Gali with 3 buzzing outlets. We visited a relatively newer outlet, just 11 years old, much younger than the original shop in the heart of the food market. “We stand apart because of our sincerity in procuring the best meat for our products and the craftsmanship passed down through generations. ” Mohammad Bhai puts it simply. Having been to Bera, we can vouch that this is indeed the case.

I’m guessing you aren’t satisfied with this vicarious experience, so the next time you get a chance just go to Bera Samosa and see for yourself.

Aspiring artist. MBA. Erstwhile corporate cavalry. Live to eat. Nerd. Suburban Mumbaikar (pseudo Mumbaikar technically). After having been conditioned by society, it's time to be conditioned by the soul...
@MadhurOza
Previous 8 hidden origins of popular food phrases
Next Food and Culture: 3 Bizzare Food Practices and their Origins