Gender Roles and Socialization: Choose Pink or Blue, but not “You”

Maria was shopping for her first child to be delivered next month. As she reached out for pink colored curtains, the mother in law anxiously questioned “Are you expecting a baby girl?!” In the meantime Maria’s husband came up with a blue baby quilt and the mother in law took a sigh of relief.

Weird, isn’t it, but most of you must have understood what the narrative is trying to indicate. How does Maria’s choice for curtains predict the sex of the baby in her womb? Rather why should color preferences determine sex preferences?

For Diwali, Mr. Shastri mentioned, “Let’s get the house renovated, Chutki’s room would be pink walls and purple roof and don’t forget to paint Bhaiya’s room dark blue and the WWE poster on the door should be retained.” 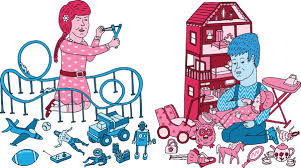 I fail to understand, why the rainbow of colors is ignored and only two shades tend to limit the thoughts of a girl and a boy. A child is never born with color preferences, but he or she gradually starts liking the colors present in their surroundings. Sex does not determine color preferences, gender does. It is no less than racism when society discriminates upon gender-based choices.

Gender socialization has made certain completely illogical ideologies as widely accepted and deeply rooted. The pattern in which the roles and responsibilities are divided by the society amongst men and women, based on their gender is understood as the concept of gender socialization. Gender roles are a societal construct and not a part of a natural law and hence differ across cultures. Widely accepted gender roles seek men as the breadwinners, while women are confined within the four walls of the house. Expectations from both the sexes differ because of the division of gender roles. Men with masculine features are brave, courageous and determined and hence, are considered fit for outdoor jobs to provide for the basic needs of living for the family. Women with feminine traits of nurture, care, and emotional identity were seen fit to limit themselves within the domestic sphere and were deemed responsible for the upbringing of children and the nourishment of the family.

Gender role did not limit itself to outline the work division among both the sexes. It penetrated deep within the society and emerged as an inevitable part to define the psychological inclination of both the sexes. 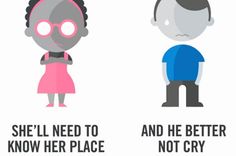 After being defeated in the football match, Sam cannot express his grief, because if he does his friends will mock, “Stop crying like a girl.” If David tries to peacefully resolve a conflict, his brother remarks, “Fight and be an MAN.” Since Jyoti was born, her mother constantly told her and molded her to “Behave like a girl.” or “Girls don’t wander on the streets” were common phrases she heard while growing.

Gender roles made its impact leading to psychological socialization. It imposed restrictions not only upon women but also men. Indeed, women have been confined and restricted to extreme heights by the virtue of being born as females. But men too have been victims of gender socialization. The idea of being strong and full of vigor has deprived most members of the male gender of being expressive, sensitive and lack empathy. Gender roles are conceived by the society and, unfortunately, became a barrier for the society itself.

Had women been made to be covered from the head to toe as a sign of modesty and men bare to depict a heart of courage, then a female should not have been borne naked like a male child. Division of tasks led to the division of society. It is always the quest for dominance that made one sex dominate over the other. In order to legitimize obligations, gender rules were laid. The perceptions of feminine and masculine emerged so strong and deep rooted that the parameters of right and wrong evolved on the basis of gender socialization. 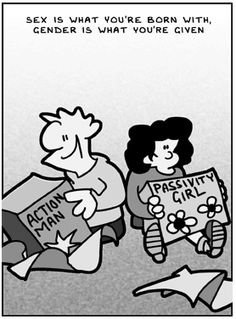 None is weak, none is less and none has the right to dominate or exploit the other. History of gender structure indicates women have been oppressed, confined and restricted under the name of culture, gender socialization, and all wrong was done under the perception of being viewed as right. Men too are caged in gender roles in terms of inability to express themselves freely. Gender roles are the brainchild of the society and its prolonged existence reveal the stronghold that the social norms hold in chaining the liberty of an individual, irrespective of their sex.

We all have grown up listening to the mindless labeling of the right and wrong behavior trends along the lines of gender roles. But have you ever wondered why and how it originated? What led to the idea of gender and why was it prioritized over the concept of sex? Why did a difference assigned to the physical traits of humans penetrate deep into societal beliefs in the form of gender to affect every aspect of our lives? Who determined the righteousness of gender roles or why did it become widely accepted across the centuries?

Is it time for a change?

Previous Gender: Origins and Evolution- What’s all the Buzz about?
Next The Concept of Sex and Gender: Why being categorized comes naturally to us