Coraline says we’ve all been programmed! 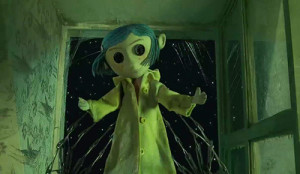 “Not just a children’s movie, Coraline goes beyond to subtly raise important questions for adults as well. Let us analyze it in an offbeat context of how everyone is being constantly programmed & how setting free is yet another way of programming!”

One description of this masterpiece can be ‘a stop-motion animation film for children’, but once you’ve seen it or read the excellent novella by Neil Gaiman that it is based upon, you’d certainly disagree.

The film is really a story about a girl named Coraline and the conspicuous things that happen around her in a certain window of time in her life when she and her family, a father and a mother move to a new house – named the Pink Palace. But to say it is just this, would be to only scratch the surface and no deeper. The film is wrought with ideas presented but not spoon-fed so to speak. Only about one minute into the film and it is thrown right up at you as to what is going to happen, how it’s going to happen and other details too but we as viewers usually want to watch it happen, like actually-show-us-the-entire-damn-thing watch it happen, and the film no doubt does complete justice to that.

I would not be dealing with scene by scene details of the film, but talk a little about the first and the last one minute sequences in hopes that you see the entire film, for yourselves, when you feel ready.

The first scene opens up with a doll, beautiful in a pink dress, being pulled from open air as if by some force into a window where a pair of mechanical hands wait to grab on to her and perform certain actions. These actions would be to rework her into a certain kind of a doll as different from what she arrived as. The hands open her up, layer by layer, through harsh measures until she has shed all of her original traits. The open space from whence she came, signifying an open all seeing mind in a free world but the fact that the pull of the hand is able to work on the doll suggests that the doll wasn’t really free, as is also evident from the buttons in her eyes. This is then more like a mere reprogramming of a certain machine that has been worked on before in a more or less similar fashion. This also hints to the idea that most of us have been in some ways worked upon and programmed and then reprogrammed, really only thrusting upon the idea that our efforts need to be in directions lending us immunity from the said hand’s pull. Such vast a thing to say, without even saying.

To proceed with the reprogramming part, now the doll’s entire self, symbolized here by her skin is reversed to make her inside outside, and filled with new body matter making her a different entity, but the same. An essential part of such reprogramming  is also the the ensuring mechanisms which need to be put in place and which certify that the doll wouldn’t learn its way out of the newly acquired anti-life world view, that the doll doesn’t see reason, that she confirms and even furthers her world view, with exhortative capabilities at times. For this her old buttons (eyes) are replaced with new buttons, basically a programmed vision that only sees what this hand wants it to see, different from the previous handler’s instructions. The doll perhaps entered thinking she’ll be liberated,  she was shown an alternate reality that she had always wished for, excluding the grim parts. She was a happy enlister, if we could see emotions in her eyes, only realizing that it was all a ruse very late in the game, or never at all. The process is done and the new doll set free, or is she?

The setting-free-but-not-really is a theme that runs all throughout the film. In the very last scene when all is shown to have turned out well for Coraline and all involved, I think the non button-eyed viewers will sense a possible alternate ending.

Tip: Watch for contrasts in personas of the characters with and without buttoned eyes, and follow these as they undergo their constant redefinitions as the film progresses.

Check out this tripped out article on a mind control mechanism the film’s  theme closely resembles:
http://vigilantcitizen.com/hidden-knowledge/origins-and-techniques-of-monarch-mind-control/

Also, here’s the obligatory link to the trailer:

Previous The Understated Brilliance of Hugo Weaving
Next Movies with Spiritual Undertones: Part-1