I Was Alive Too! 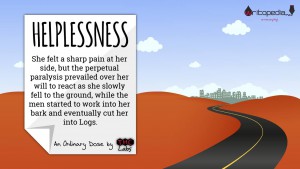 She felt a sharp pain at her side, but the perpetual paralysis prevailed over her will to react as she slowly fell to the ground, while the men started to work into her bark and eventually cut her into logs.

The crimson liquid coarsed through his throat as he experienced a long lost sense of fulfillment; a feeling of ecstasy started to rise in his body in the form of a comforting warmth, something which caused him to completely ignore the shadow of colossal human flesh hovering over him, crushing the life out of him until he was but a stain on the man’s neck.

“Carelessness”
A strangely familiar scent wafted through the air, enveloping his senses and making the hair on his back stand. He stealthily inched close and touched the golden hue from whence the scent emanated, only to hear the sound of his neck bones breaking as the mouse trap shut close in a final and unrelenting motion.

“Eagerness”
The light at the end of the tunnel seemed so inviting, the warm glow provided a sense of immense security for him as he raced towards it, as if he was fleeing for his life. But, the end of this race was marked by an insignificant flickering of the flame and the falling of his corpse onto the ground, his wings completely scorched by the heat.

“Deceptiveness”
They huddled close to each other, feeling a sense of security as they slowly trudged forward; their minds filled with a hope of better prospects in the near future.
They followed each other closely and in their herd conformity they failed to notice the doors of the slaughterhouse close behind them forever.

“Distastefulness”
The smell of the ripe Amarula fruit hung in the air, enticing a strong urge in him to experience its intoxicating trance once more. As he tasted the fruit, a feeling of utter disregard and abandon took over him, his drunken stupor only interrupted by the sound of a gunshot; his tusks eventually ending up on someone’s necklace.

“Aimlessness”
Slowly and gradually she felt her body being engulfed by the virus as it mercilessly degraded her from within. Only one thought evaded her; how could something so miniscule cause so much damage. Eventually, the virus spread and destroyed all that made her whole, until she was just another barren rock circling aimlessly around the sun.

Previous The time I sell, The money I get!
Next Understanding Dreams! 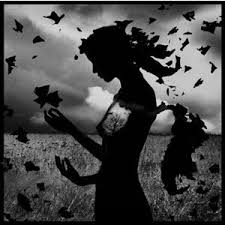 “Empty” – A Story of Emotion

She walks down the dark, lonely street, as the night wears on. The dank lamp …